Today you might be hearing that “hundreds” or “thousands” showed up in front of Trump Tower to “protest” the latest version of evil incarnate in the “Rally Against Donald Trump.” Their mission statement, if you can call it that, was this:

Donald J. Trump has made headlines in recent months with his divisive rhetoric, hate speech, and extremist plans to “make America great again”. We, in fact, believe this will do the opposite to this nation. Trump’s policies threaten many of us in the Black, Latino, LGBTQIA+, Muslim, and other communities. These policies and type of speech has no place in this country, and certainly does not have a place in the city that Trump grew his empire in–a city known as a melting pot and home for many of the same people Trump continues to wage war on. Join us at Columbus Circle as we march to Trump Tower and say NO to hate, NO to divisiveness, NO to fascist policies, and most importantly, NO to Donald J. Trump.

The group claims that over 5,000 people went. Various media outlets claim that either hundreds or thousands went. Is that what really happened? I decided to return to Trump Tower to find out what was going on for myself.

When I got there, I noticed a few supporters had already gathered. There were only a handful of them, but they were there. What I noticed immediately was that if shit hit the fan, these were the people I’d want on my side, in contrast to the weakness and/or sociopathy I saw later.

The police obviously planned for something massive. As you can see, they cordoned off two very busy 5th Avenue blocks: 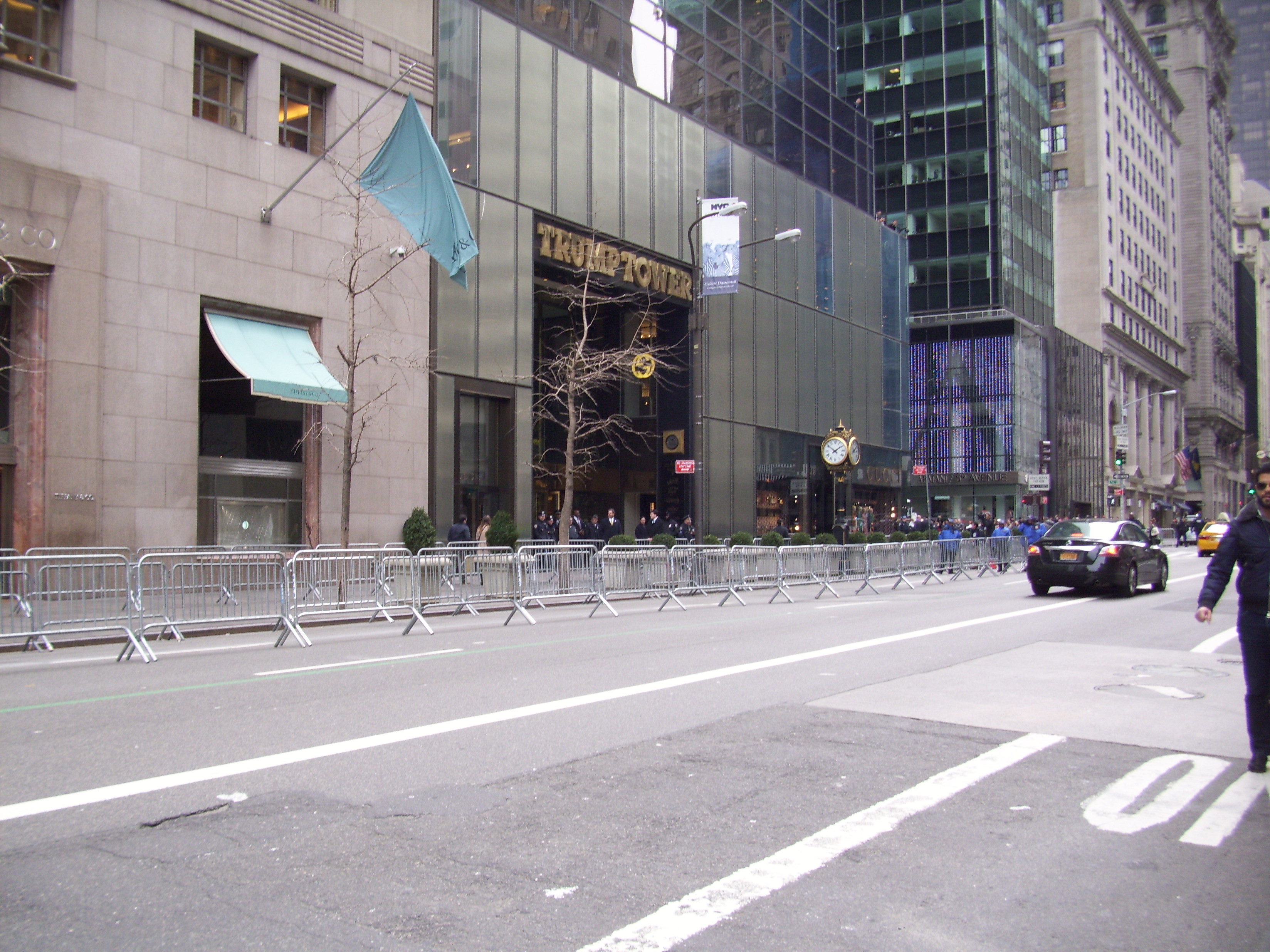 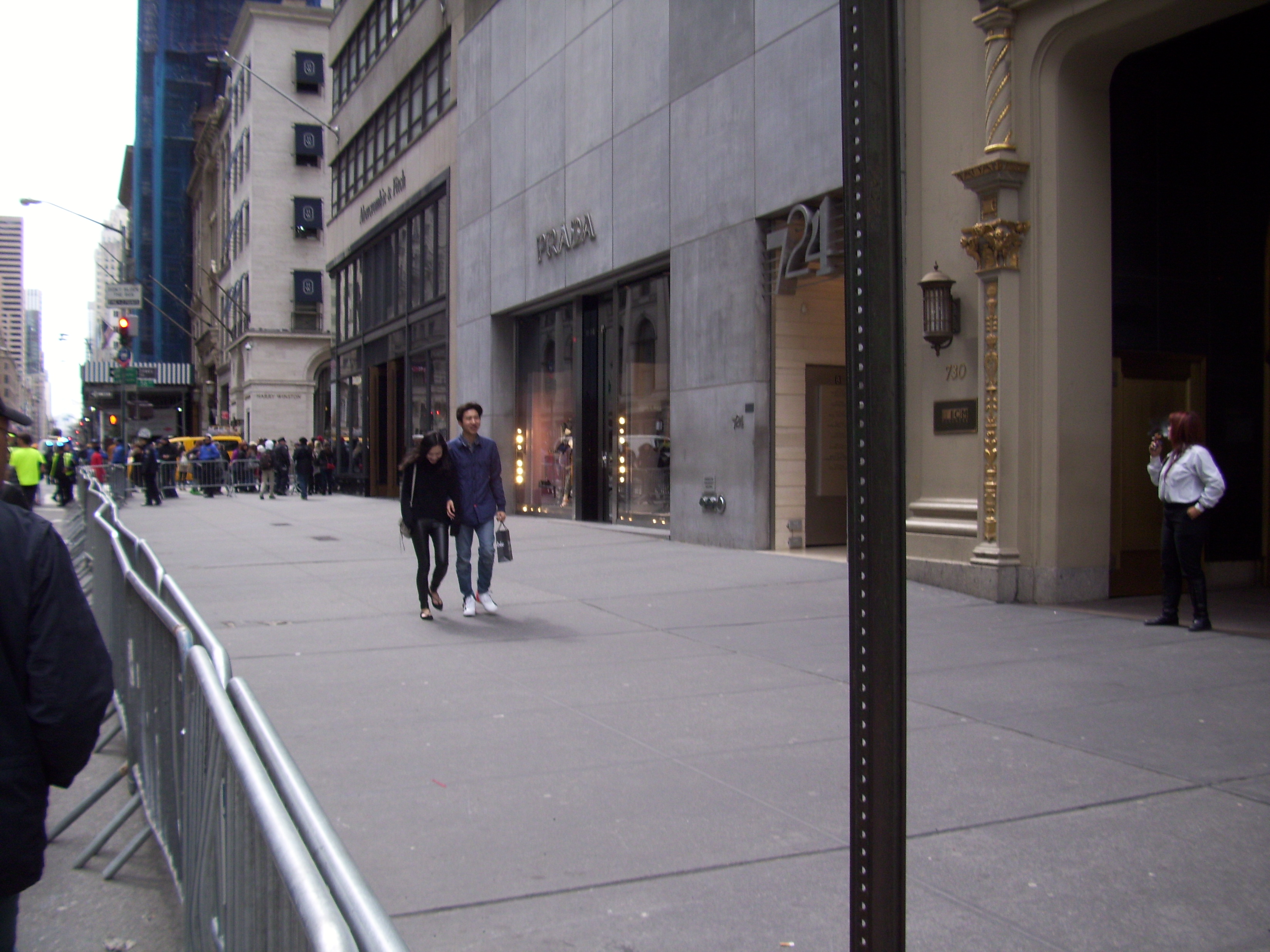 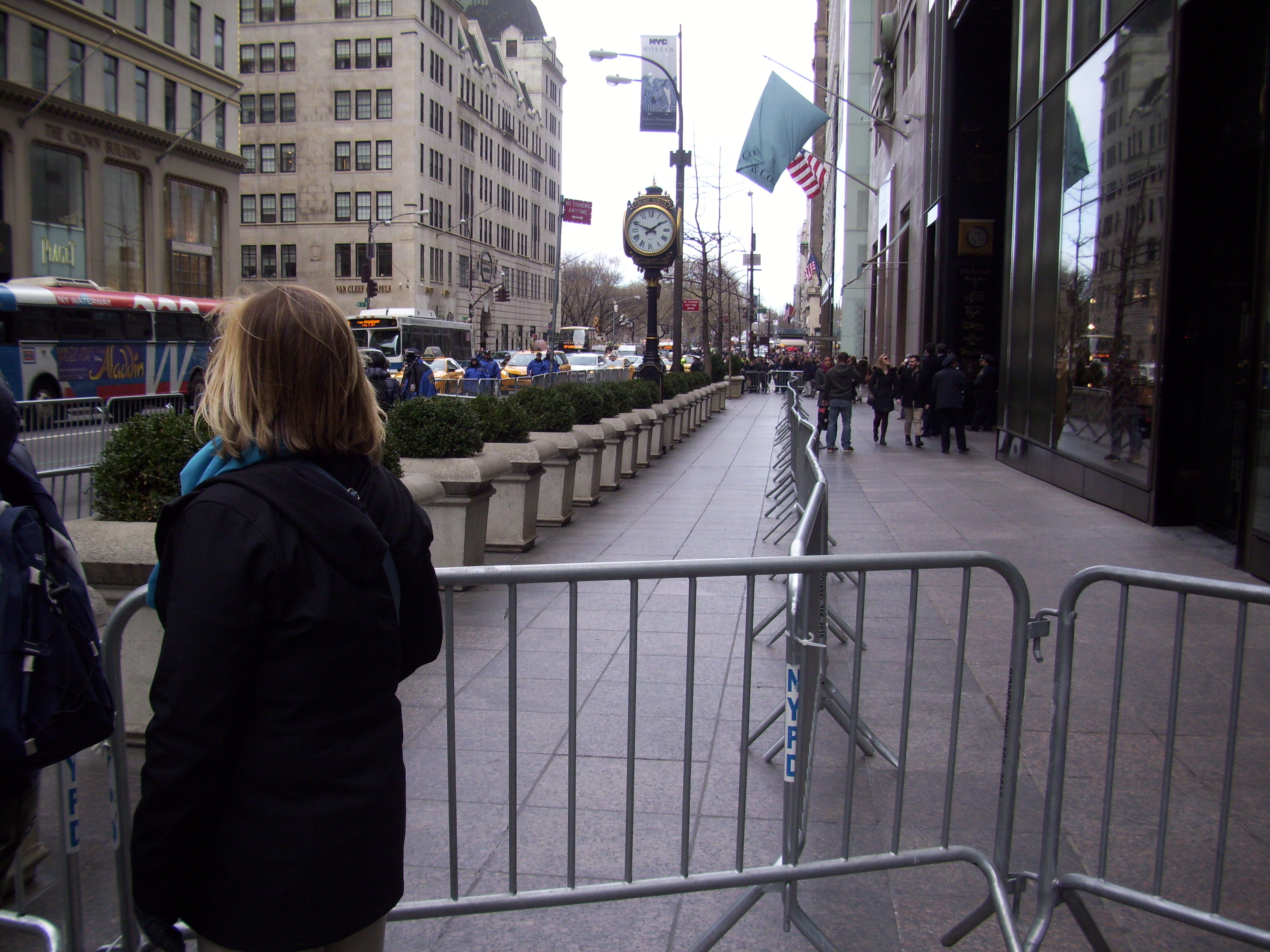 I arrived about 10-15 minutes prior to this. The NYPD began to get stricter, corralling people out of the barricaded areas, when the protesters began to trickle in, just as I was taking the footage below:

And so they came:

And what manner of people were these protesters? They were basically what you would expect. Unfortunately, my camera bugged out just as I heard them chanting “NYPD/KKK, how many kids did you kill today?”

I stayed and covered their entire column as it began to march around the block to then converge on Trump Tower. You may haven noticed from the video that there were decidedly not 5,000 people. There were not even “hundreds.”

At the building itself, notice the counter demonstrators with the “Vets 4 Trump” sign. 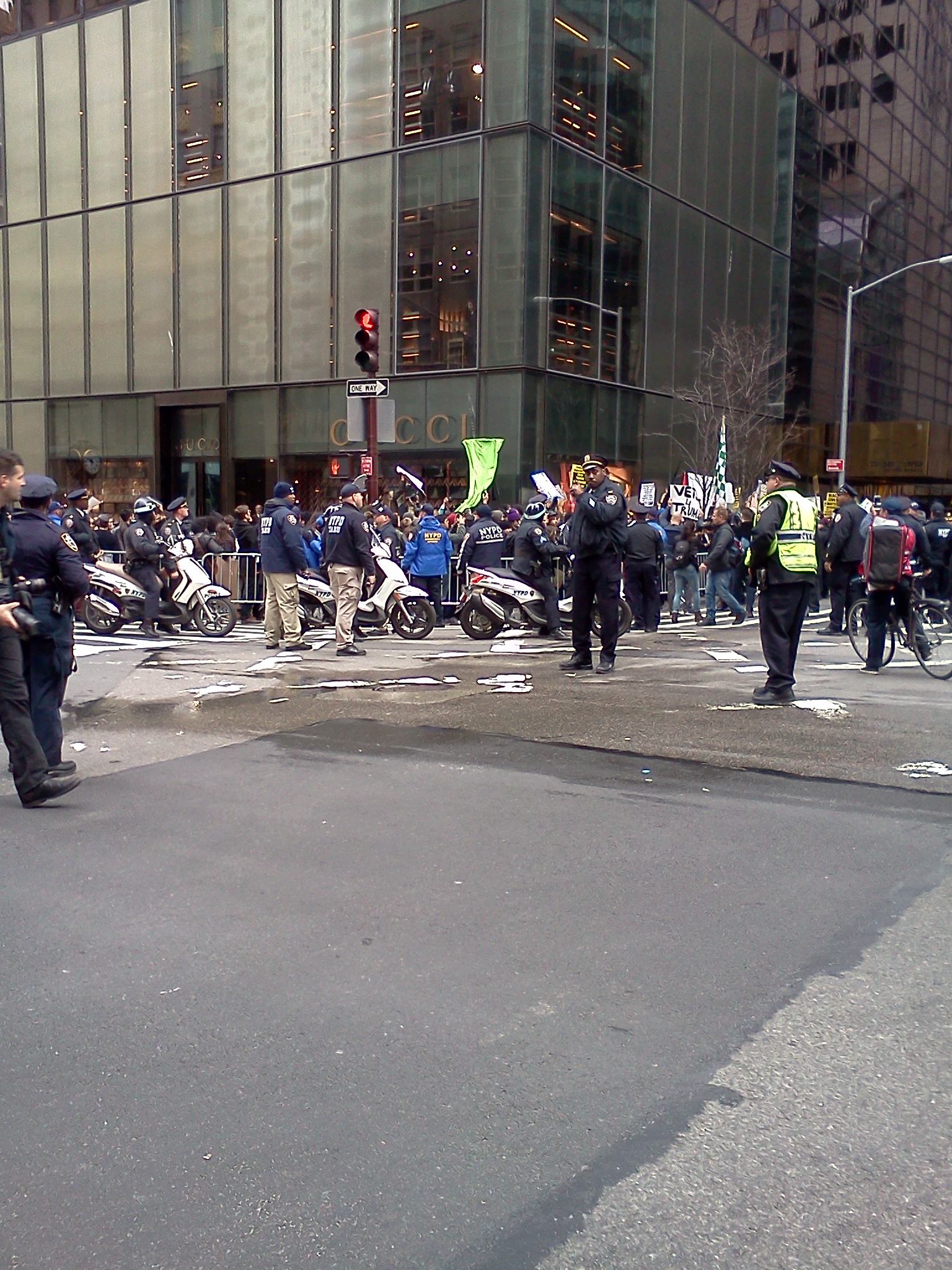 We can also see our ANTIFA friend, suggesting that the racketeers coordinated this with concurrent demonstrations in London, according to Newt Gingrich: 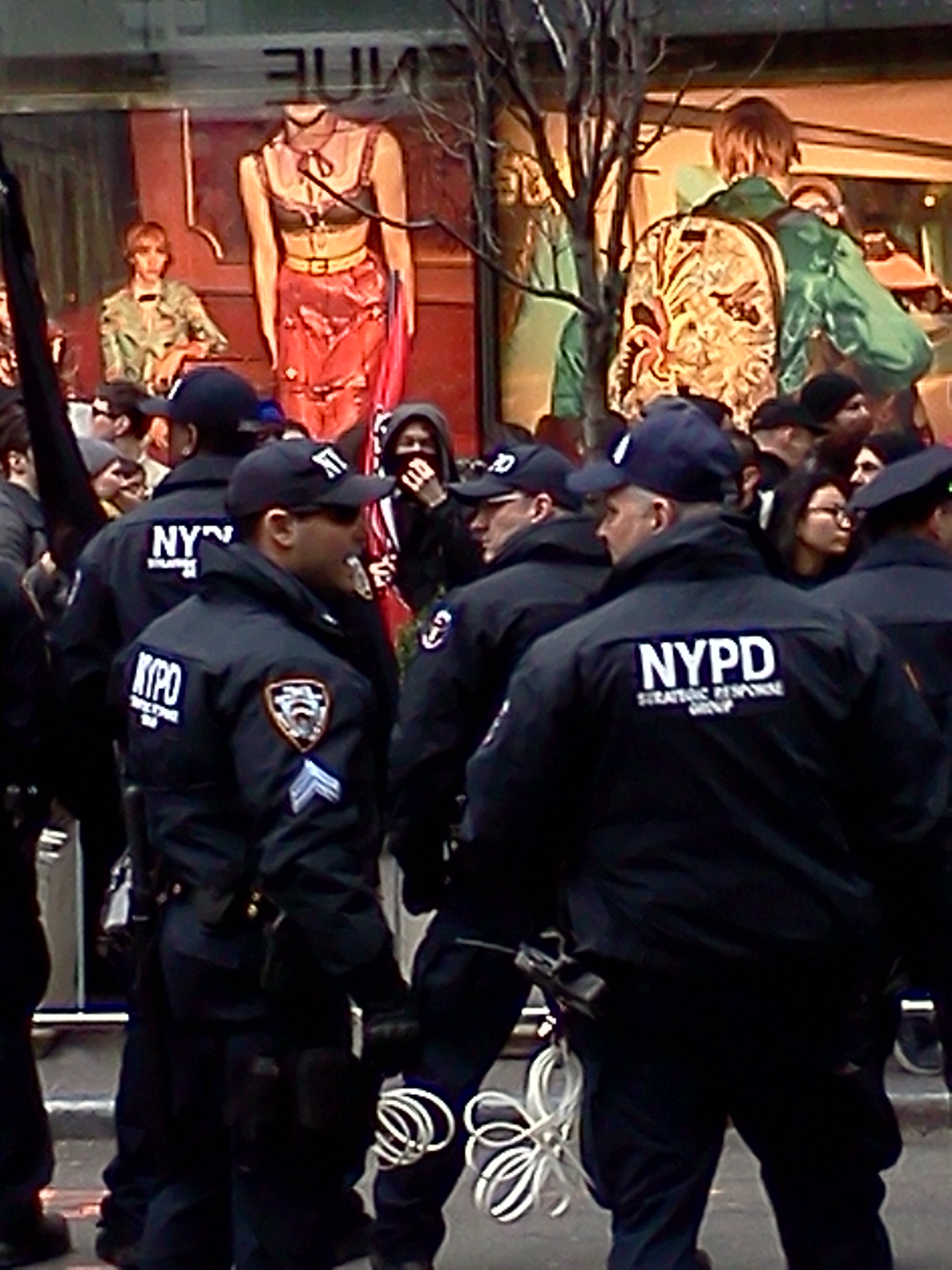 I next had a pleasant conversation with a spectator as we both observed and laughed at a woman with a man’s head of hair shouting angrily from the streetpost (unfortunately my phone’s camera is a bit primitive – I haven’t upgraded in years). He didn’t like Trump but really disliked these guys. That’s how you know the pendulum is swinging in our favor. You also will observe something that shatters the narrative in this video:

What else might you have noticed in this video? The protesters were decidedly pro-Palestine, which goes a long way in explaining why some people like Sheldon Adelson have begun to view Trump with less antagonism. The Israel lobby is losing power among the left. We’ve suspected it, but this confirms it on the street.

As the protesters began to move away from the main entrance and once more around the block, you could see how thin their line really was: 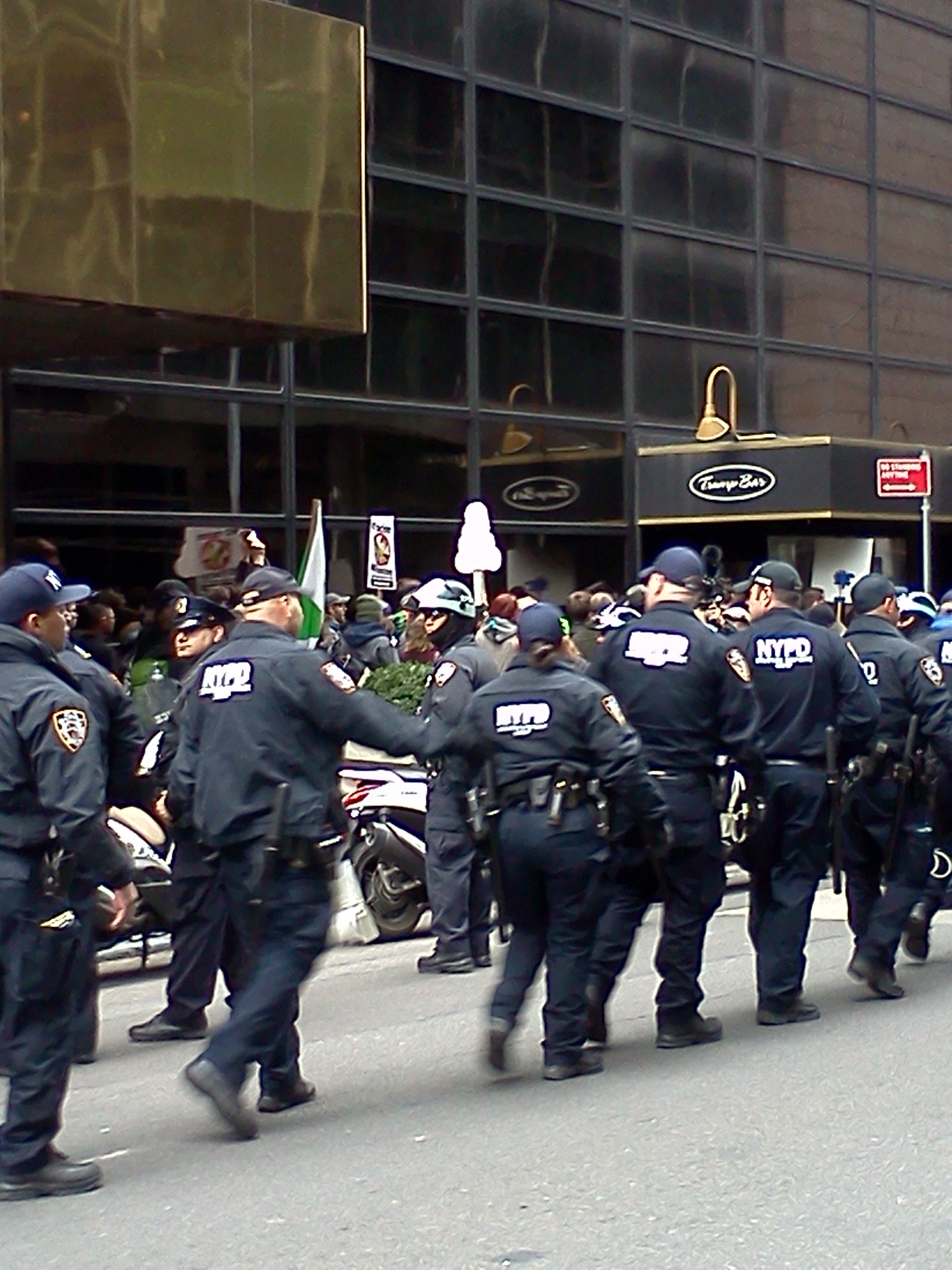 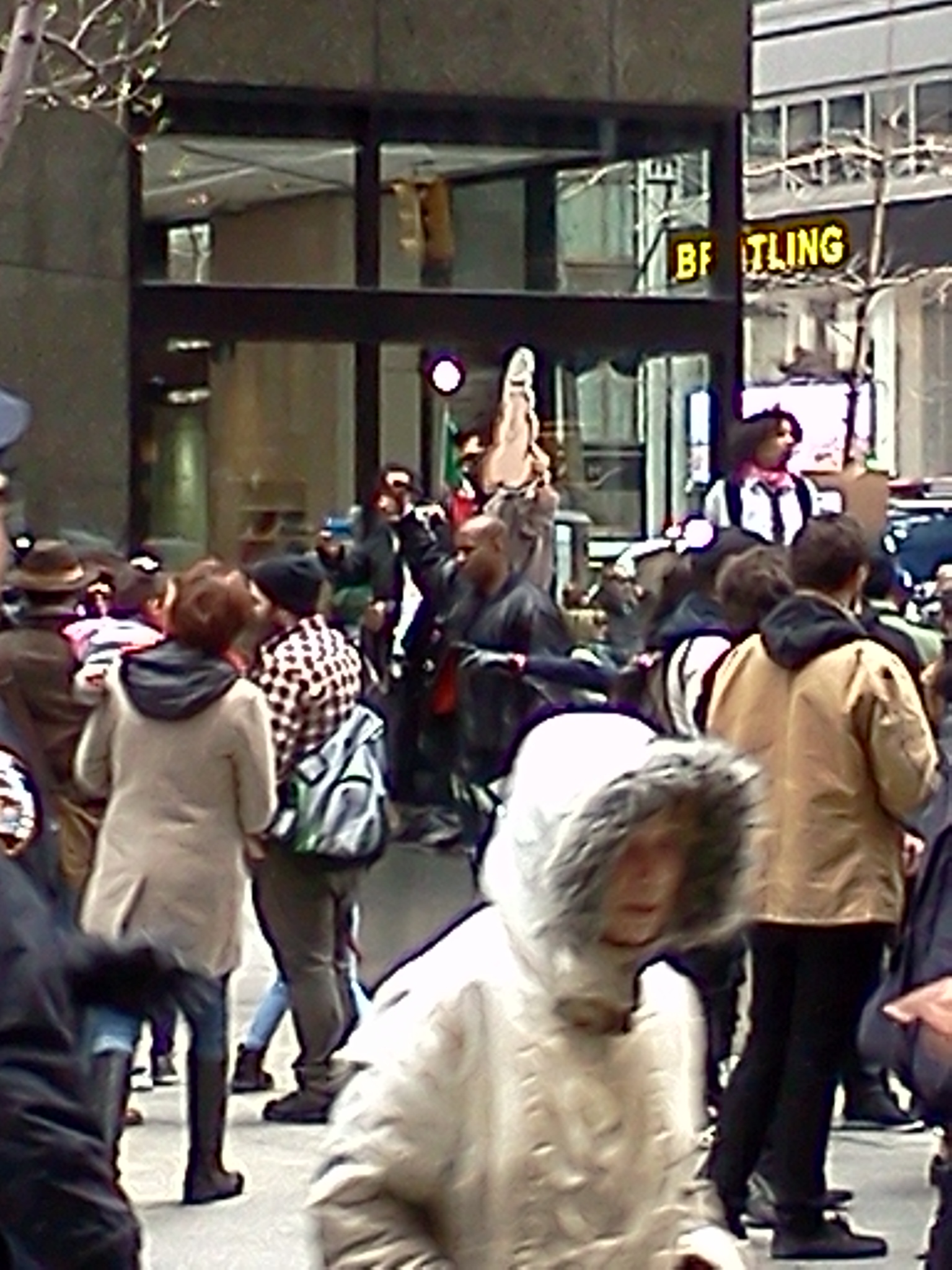 Video of the march around the block showed that they couldn’t stretch from one end of the street to the other:

After seeing the obligatory V for Vendetta mask (shown in a photo above), I circled back around the block with the protesters, watching them from across the street at first. Once more, they did not stretch around the whole block.

As I circled back around the building to see what they would do next, I caught a few stragglers, and once more, our friend that shattered the narrative:

It turned out that most of the column was now moving out, but there was a remnant that produced something notable.

As that guy, who was among the last of the remnant, left, I ran across a Trump supporter against a guy that maybe was or maybe wasn’t amongst the protesters, but wasn’t a fan anyway. It was basically a pissing contest. Unfortunately, the audio isn’t that good, but both of them were incoherent. The guy on the right in the video, the one against Trump, which is not unexpected based on his voice, was acting the part of the inquisitor, asking the supporter (a true New Yorker – you can tell by his accent) if it bothered him that “Trump lost a federal lawsuit because he didn’t rent to blacks” – this based on a case he actually mentioned in his Art of the Deal (I’m pretty sure it was actually dismissed, but I can’t confirm this for now). The supporter asked if it bothered him that Hillary Clinton was close with Robert Byrd, the KKK member – to which our Inquisitor answered yes and that he was not supporting Hillary Clinton.

Inquistor belittles Supporter’s intelligence, while Supporter dismisses Inquisitor. Both had “gotcha” lines of reasoning. Inquisitor also belittled his opponent’s style of dress, despite his own wardrobe not being so great in comparison:

This showed to me once more the power of confirmation bias, and how we all have our own lines of reasoning that we use to gravitate to our pre-existing suspicions.

So at the end of the day, what happened?

As always, SJW’s lie. What was the basis of this supposedly massive rally? It got a lot of likes on Facebook. That’s not how many people showed up. The ones that did make the rudimentary effort to show up marched around a building a couple of times and shouted some talking points, got their dopamine up by doing their good deed for the day, and left.

If you want to see why these people are actually part of the Trump campaign and will help him get elected, you should check out Stumped

, which will also show you how to turn your own haters into unwitting billboards for your ad campaigns.