Like many of you, I have been watching with amusement as the Comrades on the left castrate and castigate each other for not being pure enough to the revolution. We expect this will get worse as the weather gets warm. All violent sentiment does. It certainly looks like there will be a big purity pissing contest in the summer and fall. If we trust appearances, we can expect all kinds of crazy which will get worse as the year goes on. This will certainly be the case, but beneath appearances, something bigger is going on.

“Beto” (Beta?) O’Rourke’s announcement dazzled the media for a day. They remembered how close he was to winning Texas and how much they hyped him as a “rockstar.” Then they remembered they have other things to do. In a day, he was made to apologize for being a white male, and within a few days, stories came out about him being part of a hacking group, and about him writing violent stories, and even about him being “born to be in it” as we saw in this week’s puff piece. All of these stories are of the usual outrage culture stupidity, especially the second, but the timing is what matters here. The fake news media supposedly had these stories for years, but didn’t run them during last year’s senate campaign. We’ve known that the fake news media has been an undisguised arm of the Democratic Party and the left for years, so that isn’t surprising.

So why run the stories now? By many metric, “Beto” O’Rourke is the best positioned Democratic candidate so far to beat Donald Trump next year. Of all the Democratic candidates, he most resembles the two that have actually won the White House in the past 30 years – Bill Clinton and Barack Obama. He’s about the same age they were, and, while they were smooth and charismatic while Beto O’Rourke is a dork, some people still find him endearing, and he seems like he has a lot of room for growth in the Democratic base, while holding a better possibility of delivering their wet dream of turning Texas blue than anyone else. So why these attacks? One would think the fake news media would want to do what they did in Texas and puff him up as much as possible. Why try to tear him down?

The elites inside the DNC have their candidate in mind, and as the fake news media is their mouthpiece, it also has its candidate in mind – Kamala Harris. She’s a clever snake, without any of Hilary Clinton’s overt weaknesses, but she’s just as unlikable, and she doesn’t have a reason for running – an offer, unlike Bernie Sanders or Beto O’Rourke if he wanted to stake one out and sell it. She’s the typical conniving politician that the electorate rejected in 2016.

So why anoint her, despite all these negatives?

Because this is a party and faction that considers identity politics a core tenet of faith. Cognitive dissonance caused them to invent every excuse in the book over the past couple of years to pretend that it wasn’t a major cause for their losses in 2016. Much to my own chagrin, they haven’t learned because they can’t learn. In contemporary leftist theology, rejecting identity politics is tantamount to rejecting the Resurrection if you’re a Christian, or rejecting Mohammad being the final prophet of Allah if you’re a Muslim. You simply can’t do so and claim to be a part of that religion. Even Andrew Yang, who was running a unique campaign on the left, has been forced to come into line.

And in the religion of identity politics, Kamala Harris is the most powerful avatar. She ticks off all the boxes. Her…shall we say…”problematic” personality and lack of a clear offer mean nothing. 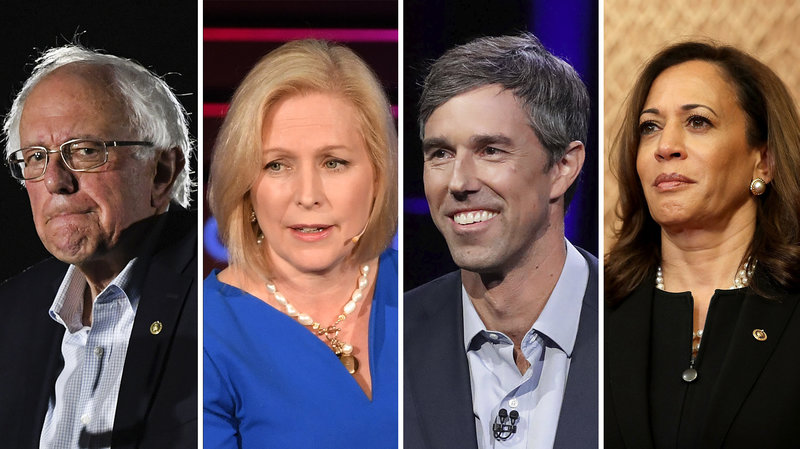 The fake news media won’t air something as eye-catching as Kamala Harris’ own father denouncing her but they’ll air controversies from the other candidates with glee. Have you noticed that she’s the only one that hasn’t gotten some kind of negative coverage out of anyone in the Democratic field?

Beto O’Rourke’s glowing Vanity Fair puff piece glamorized him for a day. Then the knives came out.

The fake news media has gone into overdrive trying to kill Tulsi Gabbard’s campaign in the womb.

Nobody knew about Klobuchar’s mean-spirited treatment of her staff until now.

The fake news media is happy to air all this and more while ignoring Kamala Harris’ glaring deficiencies and covering for them, because the fix is in. The Democrats would like Beto O’Rourke to be the VP candidate so that their dreams of turning Texas blue can become reality, but VP candidates don’t have much of an effect on the vote. See Paul Ryan in Wisconsin. It also wouldn’t work because Beto O’Rourke is more animated and interesting than Kamala Harris is, and you don’t want the VP candidate upstaging the presidential contender in that way.

But why should they care about any of that? Zealots can’t repudiate their faith. They’d be executed for heresy.

Kamala Harris is the favorite to win the Democratic nomination, regardless of if (when) Joe Biden enters the race. An old white guy won’t get the support of the party or its base who have been churned out of universities with the task of making revolution.

Unless a force of nature enters the field, or a black swan event shifts the currents, Kamala Harris will take it, but it won’t come without a cost, as the Democrats will surely slaughter each other in the mud and blood of revolutionary trench warfare.

Read Stumped to get the jump on 2020. Its chapters on political realignment are staying true to the letter.