Men through the eons have pondered how they might escape death. Perhaps none wrestled with the question as comprehensively as the Ancient Egyptians. Entire industries, architectural trends, and artistic movements were pioneered around this desire. Eternity mattered a lot to the Egyptians, and though the Greeks may have been the ones to express the quest for immortality through undying fame at its highest apogee, it was another item pioneered in Ancient Egypt. To speak the names of the dead was to make them come alive again and for 3,000 years the Two Lands of Upper and Lower Egypt spoke the name of the legendary founder, the man who first united them, King Narmer, or more commonly, Menes. Narmer was the first to wear the double crown, the first to assume the royal titles that would survive even when Egypt broke apart in its intermediate periods. He was, in a few short words, the founding father of the country…or so that’s what the Ancient Egyptians always said and wrote.

When knowledge of Egyptian hieroglyphics was lost with the decline of the Roman Empire, the name of Narmer, of Menes, was lost. Finally, he died. Then something astonishing happened. Another great warrior, Napoleon, rampaged through Egypt. Antiquities were plundered. Champollion would soon gaze upon them, and so, through the linguistic genius of another man, 5,000 years after he lived and 2,000 after his name was forgotten, the legendary King Menes lived again.

Early Egyptologists saw the king lists. They learned that Menes was traditionally considered the first king of the First Dynasty of Egypt, the uniter of Upper and Lower Egypt, the first pharaoh. But there was little evidence to back this up. Then, in the 1890s, a curious artifact was discovered. It depicted a conqueror subduing an enemy, with symbols that seemed to suggest that the enemy was Lower Egypt (the northern part of the country, where the Nile breaks apart to create a delta). This became known as the Narmer Palette.

From the moment it was discovered, many saw the palette as the founding document of Egypt, as it depicts the king of Upper Egypt conquering Lower Egypt and consolidating the country into one. This event is (and has been) regarded as the beginning of Ancient Egyptian civilization. Narmer soon became well attested in the archaeological record. Even his tomb has been found. In short, Narmer, this supposed unifier, was a real person, not just a name and figure on a palette.

When did the Pharaoh Narmer, as his palette says, unite Upper and Lower Egypt? The most probable date, based on pottery and other finds, is roughly 3,100 B.C., and it’s the Narmer Palette that supposedly records these events. Still, many Egyptologists were skeptical of this, wondering whether the Narmer Palette was more symbolic than historic. In recent years, however, there was a great discovery. A small clay tag dated an oil shipment to “the year that Narmer defeated the Papyrus People.” The Papyrus People were those of the Nile Delta, Lower Egypt, where the papyrus plant grows.

This smallest of documents was monumental in its effects. The Narmer Palette was a depiction of a real event with a real man behind it. One man did unify Upper and Lower Egypt. 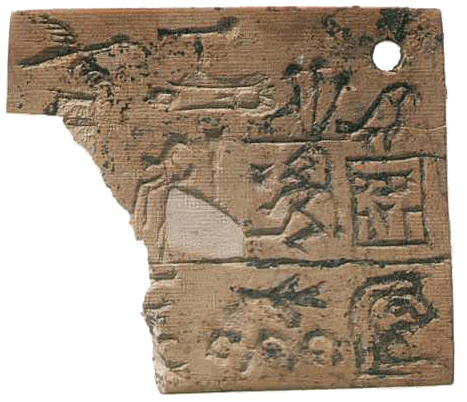 What of Menes then, that legendary figure? Like the Greek myths surrounding Troy, this time too, tradition seemed to be layered over truth, because Ancient Egyptian kings had several different names. Like clockwork, along with Narmer’s name was written another royal name – “Men,” the Greek Menes. Narmer’s “Horus” name was such, but his Nebti name, another marker of royal identity, was “Men.” To make a long story short, the two were the same person.

So there was a king named Menes who unified the Two Lands, Upper and Lower Egypt, into one country, just like the legend said.

Today, this event is regarded as the end of the Egyptian predynastic period, which was marked first with city-states, then with lesser kingdoms centered on strongholds like Abydos, Naqada, and Tjeni (see pg. 24), and then finally two big kingdoms in Upper and Lower Egypt. Menes completed this process, which had been going on from around the 37th century BC, and it was more than just a point of scholarly interest to the Ancient Egyptian mind. To him, this was the beginning of ma’at, the proper order of things, the right way to order the universe, the final triumph over chaos. The new pharaoh would create symbols and institutions that formed the basis of Egyptian cultural identity for 3,000 years. At the very end of the culture, Cleopatra VII was herself using the same royal titles that Menes used, stemming from the same god Horus.

That is an enduring culture! That’s how you cement your place in the ages!

As a side note, some Egyptologists consider the First Dynasty King Hor-Aha to have been the first true king of Egypt and therefore that he was Menes (he too, had “Men” as his Nebti name), but it’s likelier that he was Narmer’s son and heir. There are no “conquest” documents like the Narmer Palette associated with him or his tomb.

After the unification of Egypt, the legend said that Menes founded the Ancient Egyptian capital of Memphis, situated at the junction between the desert and the Nile Delta. But this is where the legend begins to divert from reality, because in 2012, an inscription was found describing the predynastic pharaoh Iry-Hor visiting the city. This would probably have been a half century before Narmer’s time, so the city couldn’t have been built by the fabled Menes. “Great builder” evidently wasn’t part of his resume.

Before he became Menes, Narmer was the King of Upper Egypt, the wearer of the white crown. Though it might seem counterintuitive, this area, which comprised mostly desert with a narrow fertile strip along the Nile, seems to have been more highly developed than Lower Egypt, the delta area.

As we have seen, at this point in Egypt’s history, the two areas had been consolidated into two kingdoms from what had once been numerous competing city-states. Naturally, unifying the two kingdoms was the next logical step, and Narmer cast his eyes ambitiously northward.

In the ancient world, great men usually distinguished themselves by way of warfare or building. With Memphis already built, Narmer, the man who would become Menes, would do so through war. There are some exceptions to this, but that’s how it most often went. It wasn’t a time for the weak.

Warfare wasn’t a very sophisticated enterprise in those days. There weren’t any horses or chariots. The Egyptians didn’t even use metal weapons until the New Kingdom nearly 2,000 years later. The Egyptians weren’t even in the Bronze Age during the time of Menes. The tools of the trade were stone maces, axes, and arrows, usually made with flint or ebony. These weapons were so prevalent among the Egyptian soldiery that nothing changed even into the Middle Kingdom 1,000 years later.

The famous “Narmer Macehead,” though ceremonial, gives us an example of the weaponry of this remote period.

Warfare at this time was an up close, personal, and inefficient affair, at least in terms of the killing power of the weapons. Warriors could and did take days to die of their agonizing wounds, as seen most prominently in the 17th Dynasty Pharaoh Seqenenre Tao, who died in the wars against the Hyksos.

No records of anything like the strategy seen in Thutmose III’s campaigns exist in this remote period. I wonder if anything resembling strategy existed on its own, quite frankly. Furthermore, armies of this period could only have numbered in the hundreds at most. Everyone knew each other. An army was a far closer-knit, more personal unit than it is now. With such primitive equipment, and such a small number of soldiers, courage, morale, and personal bravery was by far the most important thing. This would be doubly so for the leader. Men would look to their chief, to their king, to their pharaoh, for leadership and inspiration. His example would set the tone, then more than ever. Success (or lack thereof) on the battlefield was also, more than anything else, a sign of divine providence, through which all Egyptian kings justified their rule. It was important in more ways than one for the king to lead his men bravely, to infect them with his charisma and enthusiasm.

About the specifics of the war against the “Papyrus People,” all we can say with reasonable probability is that the legendary Pharaoh Menes likely earned his reputation through the chaos, the katabasis of the battlefield. 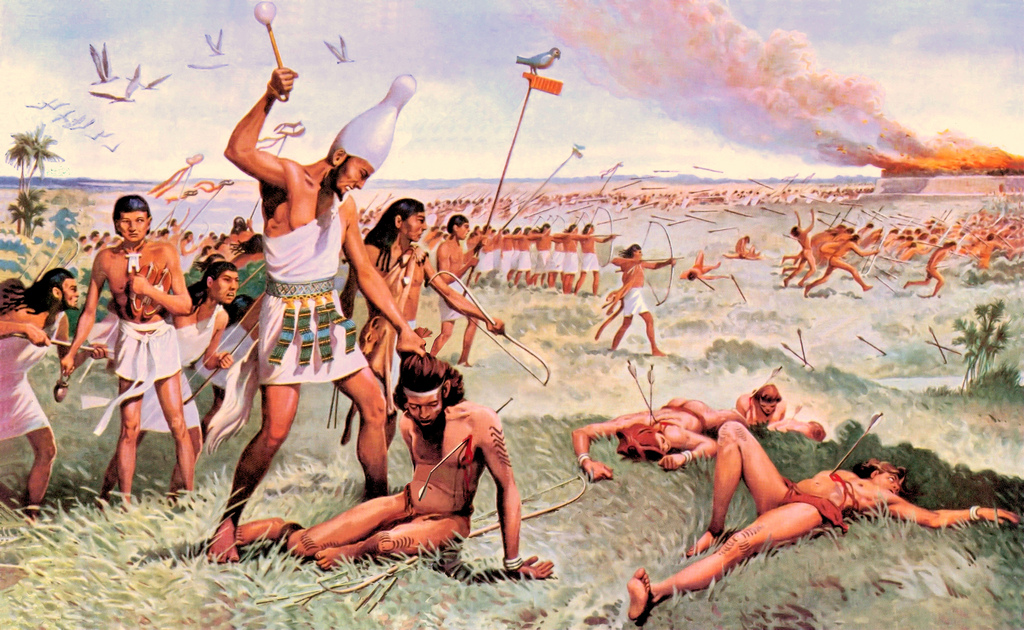 Narmer’s tomb isn’t much to look at. This first pharaoh lacked the ostentation that we associate with his successors. The Ancient Egyptians were still centuries away from the pyramids. Perhaps this was a good thing for the legacy of their legendary unifier. His legacy wasn’t a pyramid that, for all its beauty in design, is functionally rather useless. Where we know Khufu for the bombast of the Great Pyramid, we instead know the legendary Menes for being the man that made everything else possible. With his courage and charisma, and his political savvy to combine the symbology of the Upper and Lower portions of his new country, he created the iconography, philosophy, and royal institutions that would keep the Two Lands united, more or less, for three millennia. The double crown, red and white, a symbol of unity over the two lands, was Narmer’s innovation, and it stuck. Perhaps no other king in history had a legacy that was as enduring and unchanging (the Ancient Egyptians weren’t much for changing once they got something that worked).

For once, a legend has come somewhat to life. In many ways, it gives us hope that some of our own legends and fables can come true. What more secrets are waiting to be discovered?

Take the first steps to becoming a legend by reading Stumped, to become more charismatic.