Unless you’ve been living under a rock, you’ve heard the news over the weekend that blew up the baseball world with the force of a 15 megaton explosion. Giancarlo Stanton, the reigning National League MVP and major league leader with 59 home runs last year, the most since 2001, was on his way to the Yankees, officially becoming one today. In 2018, he’ll join a lineup that includes unanimous 2017 AL Rookie of the Year and MVP runner-up Aaron Judge, who belted 52 home runs himself, Gary Sanchez who, in addition to his .290 batting average, clobbered 33 even though he was out for part of the year with an injury, Didi Gregorious, who hit 25, and a whole host of other monsters that I can’t go too deeply into or you’ll be here a long time.

In other words, the lineup was a 21st century version of Murderers’ Row without Giancarlo Stanton. With him, the opposing teams might have to consider tearing down their stadiums and rebuilding them with outfields 200 feet deeper.

And the most hilarious thing about it is that the deal basically fell into the Yankees’ lap. His old team, the Miami Marlins, were desperate to offload Stanton’s expensive contract ($295 million over the next 10 years). To compound their problems, he had a no trade clause, and the NL MVP made it clear that there were only a few teams he would be willing to go to – the Dodgers, the Cubs, the Yankees, or the Astros. Notice a pattern there? If you don’t, they were the final four teams in last year’s playoffs.

Over the weekend, deals with the San Francisco Giants and the St. Louis Cardinals fell through because Giancarlo Stanton didn’t want to go. That’s when the Yankees made their move. Offering an above average, but not spectacular, second baseman in Starlin Castro (along with all his salary) and two middle of the road prospects, the Yankees acquired the NL MVP for what amounts to pennies on the dollar. Additionally, the Marlins will put forward $30 million of the remaining $295 million on his contract, which, to make a long story short, means that the Yankees will almost get the services of the reigning NL MVP for free for the next two years.

The Yankees didn’t need Giancarlo Stanton, but this was way too good an opportunity to pass up.

The most interesting aspect about the deal was the controversy surrounding it. In an amazing coincidence, Yankee legend Derek Jeter was part of a new ownership group that bought the Miami Marlins earlier this year. He’s now the CEO in charge of all baseball operations. Jokes and conspiracy theories began to go around that Derek Jeter was looking out for his old team. These were quickly disproven with the knowledge that Giancarlo Stanton vetoed trades to other teams. The Marlins had no leverage and the Yankees took advantage to get the distressed property. 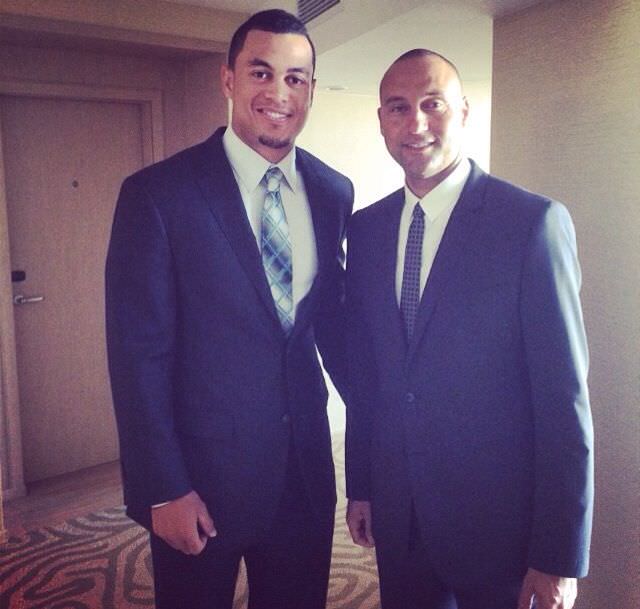 The whole situation seemed to have been handled poorly, as at today’s press conference, Stanton told the story of how the offers from the Giants and Cardinals were fielded even after he told Derek Jeter the short list of teams he’d be willing to go to. We also learned that (according to him) the Marlins threatened their star player with keeping him there if he didn’t accept the Giants or Cardinals’ offer. Things looked worse when he got into the internal problems of the team – “the lack of structure,” the rush to “subtract” and downsize even with the Marlins’ good lineup last year. It all gave the impression of a chaotic enterprise that seems intended to be a team in name only, the only goal of ownership being to keep costs down to then perhaps sell it later as a distressed asset for a profit. The press conference is worth listening to.

Giancarlo Stanton looks like a man relieved, over the moon to be leaving the Marlins and joining the Yankees.

Some may accuse Giancarlo Stanton of being difficult with his demands, but can anyone honestly blame him? If he had a full no-trade clause, why would he not want to use it to go to a team that gives him a reasonable chance of winning a championship? That’s what every athlete wants to do.

The saga doesn’t make the Marlins look good, and Derek Jeter is now their public face. His popularity was tanking in Miami long before this, but trading away your franchise player in a fire sell is going to engender a great deal of hatred among a team’s fanbase.

This doesn’t bode well for Derek Jeter. The man was for 20 years the most beloved figure in baseball, the man whose integrity was instrumental in carrying the game through the troubled years of the steroid era. With so many of its biggest stars tainted, he was the one man who was above reproach, whose consistently great performance, particularly in the postseason, showed that there was still hope for greatness without cheating – an aspirational vision that appeals to everyone.

But Derek Jeter is now in danger of squandering the untouchable glory he built up over his career as a player, which has immortalized him, by possible shenanigans in running the Marlins. Seemingly doing your best to sabotage a team that was headed in the right direction (or at least, it will appear that way to many people – as Giancarlo Stanton himself said, the lineup was good, they just needed some pitching) will lead to a buildup of ill will. While Alex Rodriguez had a controversial playing career, his retirement has gone swimmingly, as he’s become a very well-regarded broadcast personality on Fox. Derek Jeter appears to be heading in the opposite direction.

As Robert Greene reminds his reader in The 33 Strategies of War, where you end is the most important thing of all. Each campaign is only the prelude to another. A good campaign will be overwritten by a bad campaign.

Derek Jeter will always be regarded as one of the best players of his generation and among the greatest Yankees ever, but his hallowed status could well be tarnished if this trend continues. He’s probably among the most hated men in Miami at this moment in time.

Although the allure of (partly) owning a team may have proven too much to resist – why put himself in this position with a deeply distressed franchise? More importantly, the primary partner he went in business with, Bruce Sherman, may have a scummy history.

Associating with grifters and pulling apart beloved assets and franchises in the process is a sure way to diminish your glory. If Derek Jeter cares for his immortal fame, he may want to remember the importance of ending well. In the Giancarlo Stanton saga, he seemingly didn’t.

The importance of ending well is related to the recency bias of memory. Read Stumped and find out how this bias matters in everything you do.