Often, success strikes from the most unexpected quarters. The most unexpected man in the most unexpected way finds himself a sudden phenomenon whose name will always be remembered. The American Civil War presented many such cases, but perhaps none were as notable and more important than the stunning rise of Ulysses S. Grant. The description initially given in Grant As Military Commander (which I’ll reread and review here sometime in 2018) is most telling:

In that winter of 1860-61 Grant’s fortunes had reached their nadir. He was slovenly and unkempt in appearance; he had not shaken off his drinking habits; his father and younger brothers despised him and refused to lend him money; he was generally regarded as one of life’s failures. Nobody would have dreamt that from this shabby chrysalis would emerge, within the next four years, the triumphant victor of the Civil War.

Through the war, Ulysses S. Grant built a tremendous reputation, and it was the Siege and Battle of Vicksburg that was his greatest moment of glory, his aristeia. Its capture was the single most decisive moment of the Civil War and it would turn the victorious Union general into a made man, where he would soon ascend to heights unthinkable.

Why was the Battle of Vicksburg Important?

When it became clear through 1861 and 1862 that the Civil War wasn’t going to be the brief affair that everyone had expected going in, the grim reality of a long, drawn out war of attrition became clear. At first widely derided, General Winfield Scott’s Anaconda Plan was grudgingly accepted. The Confederacy wouldn’t be defeated in a single battle, but rather the Union would have to gradually squeeze the life out of it through a blockade and by capturing the Mississippi River to split the secessionist area in two. 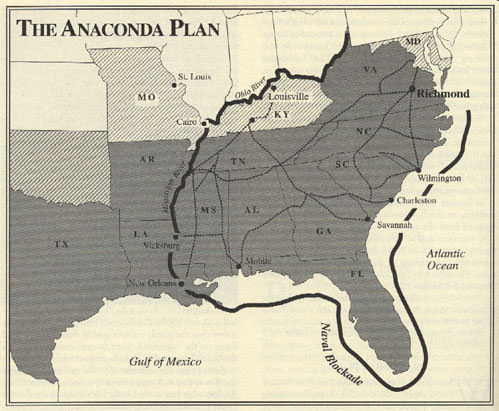 Throughout 1862, the Union armies made gradual, but costly progress in this area. Setting up the naval blockade proved relatively easy given the North’s industrial superiority, but tightening the noose around the Mississippi proved far more challenging, as it required the conquest of territory around that river, and the Confederates, as always, put up a ferocious fight.

Ulysses S. Grant had won several hard-fought victories in those early years, capturing Forts Henry and Donelson and beating the Confederates at the bloody Battle of Shiloh. The victory was very costly, and the media called for his removal, but President Lincoln refused, famously saying “I can’t spare this man, he fights.” Lincoln showed much faith in his general throughout the war, and it would pay off most resoundingly at the Siege of Vicksburg.

Victories like Shiloh gradually saw the Union closer and closer to severing the Confederacy from the Mississippi River, and thereby split the rebel territory in two, but the fortress of Vicksburg stood out as a thorn confounding the Union’s plans. Situated on a bluff overlooking a bend in the river, it presented an extremely dangerous obstacle to any Union ships attempting to pass, as they would be utterly exposed to enemy artillery.

Unfortunately, it couldn’t be ignored either. The Battle of Vicksburg was important because the fortress would need to be captured if the Union was to control the Mississippi River and cut the Confederacy in two.

Capturing it wouldn’t be simple, as you probably imagined by now. Aside from its commanding position on the river, making an assault from the west impossible, assaulting Vicksburg from the north and much of the east was also nearly impossible, as it was in the midst of bayous and swamps called the Yazoo Delta. Further to the east, beyond the Delta, was enemy territory that Union forces hadn’t conquered.

Numerous attempts throughout late 1862 and 1863 were undertaken to bypass the Yazoo Delta and reach Vicksburg, but none succeeded. There was intense pressure on Ulysses S. Grant from superiors in the War Department and the media, but President Lincoln kept faith in his general.

Confounded by trying every conventional strategy, the Union general decided he would go unconventional. Knowing that his superiors in the War Department would never approve of his audacious plan, he withheld as much as possible from them, only letting them know after he set out.

Grant’s plan, assisted by Admiral David Porter, was to actually run the guns of Vicksburg and establish a beachhead south of the city on the eastern side of the Mississippi River. In doing so, he would risk all his men and cut himself off from his supply lines. It was a big risk, but if it were successful, he would be in position to siege and capture Vicksburg.

Reinforcing his ships with bales of hay, logs, and other amenities, Admiral Porter ferried two of Grant’s corps downriver past Vicksburg on a moonless night. The ruse didn’t trick the Confederates, who fired mercilessly upon the Union flotilla, but only a few ships were sunk, and most of Grant’s army was now on the eastern side of the river south of the city. He left Sherman’s corps behind to divert the attention of the defenders. Sherman would eventually join him.

Turning east, Ulysses S. Grant relied on the country for his supplies. His goal was to first cut off Vicksburg from its own line of supplies stretching to Jackson, Misssissippi. This was done in lightning-quick fashion, stunning the Confederates. With his army now positioned between Vicksburg and Jackson, Grant turned east.

His actions befuddled the commander at Vicksburg, John Pemberton. Not wanting to be seen as abandoning the city, but also knowing that it was better to cooperate with General Joseph E. Johnston, the commanding officer of the Confederate forces in the western theater, he tried to make both choices, stringing his forces out across the state. Therefore, they weren’t concentrated enough to stop Grant’s advance and were defeated separately.

On May 18th, Ulysses S. Grant won the Battle of Champion Hill. He would then force the Confederates back across the Big Black River. The Siege of Vicksburg then began in earnest. For nearly seven weeks, the noose tightened around the city as the siege dragged on. The population suffered tremendously. With nowhere to go, Pemberton surrendered on July 4th. 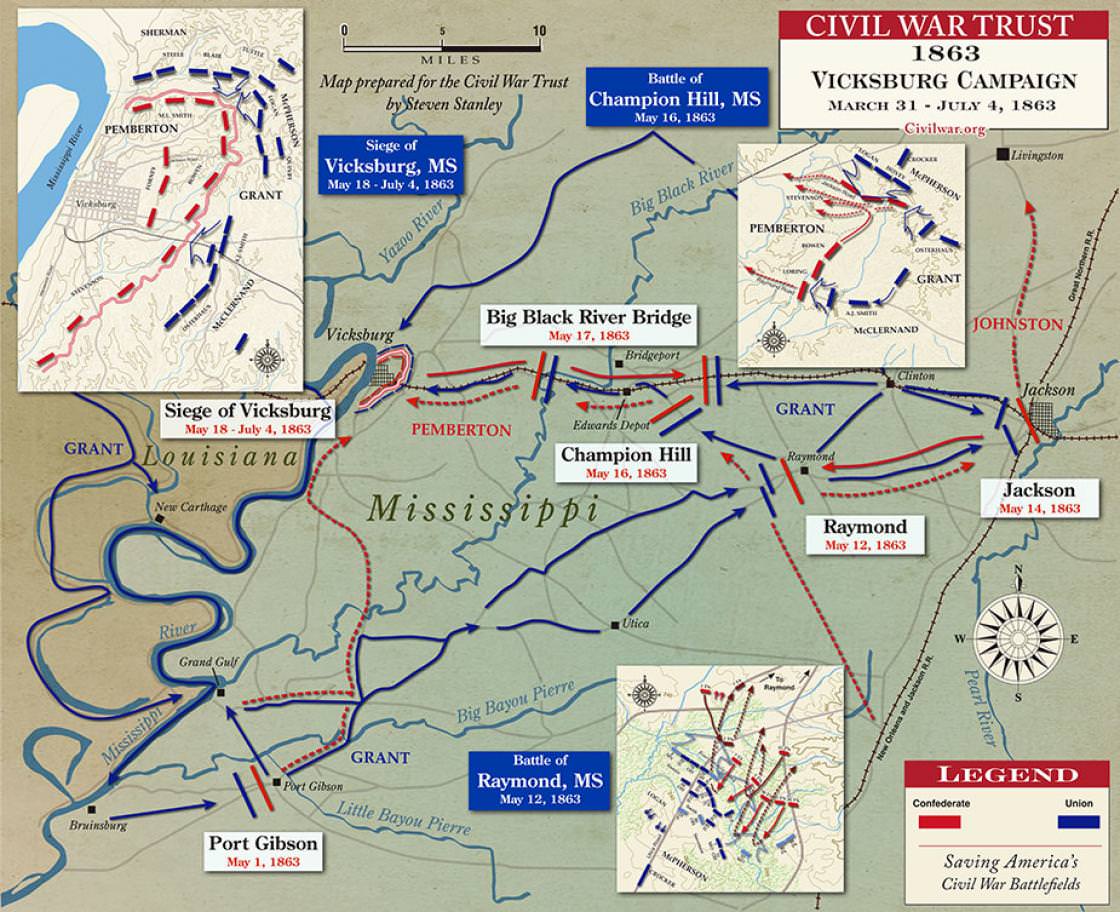 With the siege and capture of Vicksburg, the Union took complete control of the Mississippi, cutting the Confederacy in two. Now unable to draw troops and supplies from west of the river, the Confederacy’s death warrant was signed. Its only hope afterward was that the North would tire of the war, but with the re-election of Lincoln after Sherman’s infamous march to the sea in Georgia, which was probably inspired in part by Grant’s Vicksburg campaign, the last remaining hope was gone.

How Grant Won the Battle

The key to winning the battle not only lay in the willingness of Ulysses S. Grant to persist after repeat failure, the trait which he has become so famous for, but in his willingness to completely defy the expectations of friend and foe alike. The Battle of Vicksburg required something more, however. It required him to defy every expectation, to startle and unsettle his enemies to compensate for their tremendously strong position. If Vicksburg was in such a strong position that his enemies couldn’t imagine any kind of siege, Ulysses S. Grant could use that belief to startle and unbalance them with unconventional tactics. When he acted, they were unprepared, and that was a force stronger than Vicksburg’s fortifications. The city suddenly found itself under siege, and Ulysses S. Grant solved the problem of getting to it with rapid results.

Defying conventions and expectations according to a well-thought out plan can leave you with results that change the world (as Vicksburg’s siege and capture did).

In The 33 Strategies of War, Robert Greene describes a certain tendency that you can take advantage of, just like Grant:

We humans are conventional by nature. Once anyone succeeds at something with a specific strategy or
method, it is quickly adopted by others and becomes hardened into principle–often to everyone’s detriment when it is applied indiscriminately. This habit is a particular problem in war, for war is such risky
business that generals are often tempted to take the road well traveled. When so much is necessarily
unsafe, what has proven safe in the past has amplified appeal.

Harness that power for yourself by reading Stumped and learn from a campaign that also took advantage of these traits of the human mind, and was as unconventional and daring as this decisive battle of the Civil War.