When you think about the rapacious capitalism of the Gilded Age, one name comes to mind above all others: John D. Rockefeller, founder of Standard Oil.

He was no more unscrupulous than his contemporaries. In fact, he might even have been less so. No labor crisis occurred during his tenure at Standard Oil, no strikes. Workers were paid above average wages. Prices for petroleum products were usually low – it was his successor who kept prices high. Why then, does he have such a notorious reputation to this day? How did he acquire his historic fortune, at what price did it come, and was he able to recover his image?

These are the questions asked in Titan: The Life of John D. Rockefeller, Sr. This is a long book at almost 700 pages, but it covers Rockefeller’s the entire life. If you’re strictly interested in his business career, which was my primary motivation in buying the book, you might be disappointed, since about half of it covers his lengthy retirement, but there is an upside. From beginning to end, you find out the systems that John D. Rockefeller used to make himself history’s most successful capitalist, and also how he was able to maintain such a strong mental fortitude to keep him focused and heedless of criticism. Where most people can’t take their critics and pay too much attention to them, John D. Rockefeller was paying attention to other things like making money. 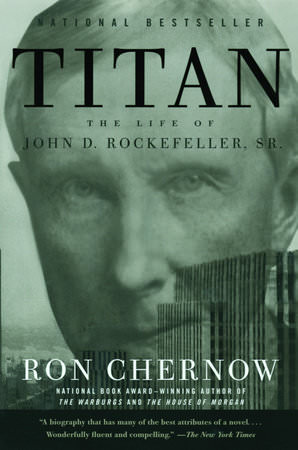 The Ingredients of Success


When examining historical titans, it’s always useful to look at their backgrounds and determine if they acquired the ingredients of success early on. If so, does it imply that you need to get them early to be a success in your adulthood? In Rockefeller’s case, it’s clear that several crucial ingredients of his stunning success were acquired early.

John D. Rockefeller was the second child and first son of William Avery (known as “Big Bill”), and Eliza Rockefeller. Though not a pauper, John D. grew up in a household that always teetered on the edge of a cliff. “Big Bill” Rockefeller was a notorious conman and would leave his family for months at a time, treading a wide territory in the selling of his wares to evade authorities. This left him being raised by his mother, Eliza, who was a devout Baptist.

This upbringing had long-lasting effects on Rockefeller, some good, some bad. He was haunted by his father’s example and determined to be as different from “Big Bill” as possible. Eliza’s devout Baptism was useful to John D. because it imbued him with a great sense of righteousness. He was always convinced that what he was doing was right, making it easy for him to accept conflict and criticism. This trait paid dividends, especially in the famous lawsuits Standard Oil got itself involved in. John D. Rockefeller was a model witness for the defense. He simply wouldn’t pay his critics any heed, because he knew they were wrong.

Eliza was a descendant of Puritans, and her devout Baptism imbued the Protestant work ethic into her son. He had to work in menial ways to survive in those early days, as his father dragged the family from dinky town to dinky town, moving his con jobs out further west. The result was that John D. learned as he grew up and by experience, not with a fancy education. He studied practical subjects at a small commercial college and then got to work as a bookkeeper.

The chapters about Rockefeller’s early life are easily some of the most compelling in Titan. Yet, that’s where things only begin to heat up.

It took a few things to form Standard Oil. Most notable of them all, though, was an unswerving faith in the early petroleum industry. At the time, the only oil fields in the world were located in western Pennsylvania, centered on Titusville. Everyone knew that the oil there could only last so long. With no apparent alternatives in that crucial decade of the 1870s, speculation was rampant that the industry wouldn’t long survive. Rockefeller, though, charged ahead with his plans for a massive company that would dominate the industry for the long term, famously saying to the doubters: “the Lord will provide.” Clearly, his Baptist upbringing and unswerving faith in himself and God’s bounty was instrumental not only in his own success, but in transforming the world.

The doubts about the future in those early years only contributed to a state of anarchy in that was embroiling the petroleum business.

The infant industry that John D. Rockefeller decided to enter in the 1860s was unstable. after a rapid rise during the Civil War, prices rose and fell rapidly. Most refineries were ramshackle affairs run by amateurs and they were taking losses. The effect of this was to ultimately drag prices down so low that everyone in the industry would take a loss. It was a classic collective action problem. By wanting to survive as long as possible for themselves, the ramshackle refineries threatened to topple the professional ones, such as the one run by Rockefeller and his partners in Cleveland. In many respects, John D. Rockefeller came to the same conclusion that Thomas Hobbes had in addressing this nasty state of nature. The petroleum industry required a strong sovereign and the name “Standard Oil” is indicative of this mindset.

Rockefeller’s business methods (which are important enough to warrant their own post) are commonly seen as devious. But when reading about the state of the oil industry in those crucial years, one has to wonder whether his tactics were entirely wrong. He ruthlessly drove competitors out of business, but this was preferably done by absorbing them into Standard Oil and making them far richer. When reading Titan, it’s hard not to agree with the tone of this speech The Men Who Built America, which dramatized the decision of Standard Oil Co. of New Jersey v. United States.

Standard Oil’s tactics would be illegal today, but they weren’t in the crucial years of the 1870’s and 80’s when the company became the industry’s titan, and they succeeded in stabilizing it. It should also be noted that the other refiners were happy to use the same tactics the hated Standard Oil used whenever they were able.

Ultimately, it forced a correction from the state to ensure opportunity for everyone through fair competition. The trustbusting crusade that Standard Oil prompted was successful, though that success has now been threatened by the likes of Facebook, Google, and Amazon.

In the rise of Standard Oil, John D. Rockefeller used underhanded tactics that would become illegal as a result of his own success, but his business morals (or lack thereof) were standard for his time. It was an era full of schemes to “restrain trade” in a free market. Rockefeller’s were simply the most successful.

And yet, for all his sins, he wound up leaving the world a better place.

Next to our beloved President, he was our country’s biggest citizen. It was he who visualized as did no other man the use to which great wealth could wisely be put. Because of him the world is a better place in which to live. Blessed be the memory of World Citizen No. 1.

This was well-put, because when reading Titan, you’ll find that more than any other individual, John D. Rockefeller is responsible for the creation of the modern world. Standard Oil was the prototype for the modern corporation that dominates the world economy.

In his philanthropies, he also created the standard that modern non-profits follow. Before him, the wealthy usually gave random gifts to the poor or subsidized the arts. Rockefeller’s charities were organized on scientific lines for the accomplishment of specific goals, none more so than his medical and educational philanthropies. In everything from the eradication of hookworm to the founding of the University of Chicago, Rockefeller’s money was involved. It’s staggering how much of modern education and medicine stem directly from the wealth this titan generated from the chaotic start of the petroleum industry.

You’re feeling the effects of Rockefeller’s influence in the products you buy, the doctors you go to, and even the museums you visit. Never has one fortune affected the world on such a profound level. As the title proclaims, he truly is a titan and must be regarded as one of the most influential human beings to ever live.

Rapacious and generous, stodgy in his younger years and jovial in his twilight, supremely influential but never boastful, he truly was one of a kind, and his name will surely live on forever.

This was a masterful work, a must for any entrepreneur. If you want to learn from one of history’s Olympians (and avoid his mistakes), I highly recommend Titan.