The latest border craze has pushed us past a dangerous benchmark. We’ve seen hints in the past year of emerging leftist violence, but in the aftermath of episodes like the inauguration riots, the Berkeley riot, the assassination attempt at the Congressional Baseball Game, and so on, most prominent leftist leaders were quick to denounce the conduct of those involved. With this latest round of hysteria, we’re seeing active harassment of public officials and demagogues like Maxine Waters cheering it on.

This is only a step away from violence, and with people in positions of authority celebrating and screaming for more of it, it only eggs these “activists” on. Implicit permission to harass and threaten political opponents is becoming explicit permission.

With Justice Anthony Kennedy now announcing his retirement, I’m betting that the hysteria will get worse as the summer heats up.

To restate the problem – the contemporary left is now completely steered by Year Zero revolutionaries who seek to overthrow all aspects of a social order they see as corrupt or impure. In practice, this means destroying any connection to the past, no matter how small. They see themselves as morally pure and anything outside their ideology as not misguided, but morally inferior. It becomes very easy to justify violence with that kind of pathology. In fact, that kind of thinking has been at the center of many atrocious revolutions throughout history.

For years, I’ve warned that the left was heading in this direction, even before Donald Trump ran for President. Quintus Curtius remarked that they’d begin killing people in five years, with the tacit approval of people and institutions of authority. We’ve already had some close calls. We’re getting closer.

The media has a business model centered on outrage. Its stories, which will egg these “activists” on, are guaranteed to egg you on also. There’s something vital that you need to keep in mind, however. If you’re ever out and find yourself harassed by these “activists,” don’t retaliate.

Don’t get in their faces when they get in yours. Don’t retaliate even if they physically attack you unless you have no choice.

That’s not fair, but the world isn’t. Leftists can do things their political opponents don’t get to do. They have institutions in place to excuse their actions. They get to harass or even assault people without much incident, but if one of their opponents throws a single punch, we’ll never hear the end of the hysteria about “far right extremism.” Unfortunately, the idiots in Charlottesville who decided it was a good idea to carry tiki torches and shout “blood and soil” gave the left a visual to focus on. Any retaliatory action will be painted in that light.

The only solution is to take the high road, not retaliate unless forced to, and continue to shine a light on how awful the left has become. They continue to expose themselves with each incident and each outrage. Despite the constant hysteria, Trump’s approval ratings have gone up, and generic Democrats have gone down in electoral polls.

You know by now that I don’t put much stock in polls. Just consider them a rough indicator.

While the left is arguably more motivated than their opponents, that motivation is stemming entirely from cognitive dissonance and hysteria. Instead of putting together a cohesive message, they’re being anti-persuasive because they’re driving everyone away from them with how radical they’ve become. 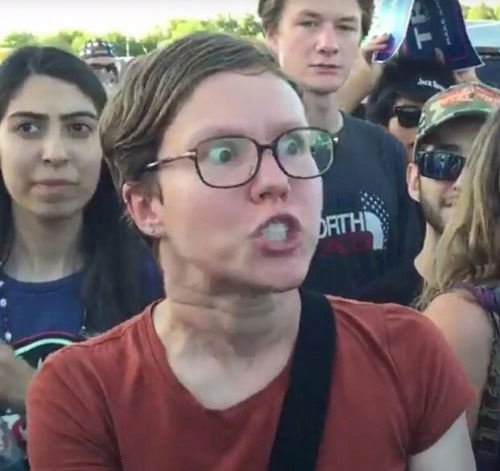 That’s what they say about their opponents, but their opponents don’t demonstrate it by their actions (with some exceptions). Visuals always matter more, and the image of leftist “activists” harassing administration officials isn’t one that washes away so easily, nor does Robert DeNiro essentially calling for violence at a national award show. Maxine Waters going off the deep end doesn’t either. And so on.

They’re more effective weapons against themselves than anything their opponents can do. Retaliating only helps them.

So while it’s frustrating, these are the rules of the game. These people are trigger-happy. You need to not give them a target to shoot. They’re so trigger-happy that they’ll shoot themselves absent any other targets.

Just don’t be the target.

The left has become so awful that it’s becoming harder and harder for any reasonable person to support them, even if the Republican Party isn’t exactly the most endearing alternative. This hysteria is going to get much worse before it gets better, because with each loss, the left will see confirmation bias that their vision of an impure society is actually real. We just have to make sure they don’t get into power.

The best way to make sure they don’t get into power is to divert all attention to how awful they are. They do so on their own every day.

Don’t give them a way to divert attention elsewhere.

Read Stumped to be as persuasive as possible against the loony left, because it predicted their demise in 2016.