The Roman Empire is synonymous with one word – winning. The other day, I watched a catchy video aggregating recorded battles on Wikipedia, lighting up various areas of the map by year. Rome was the global leader in “battles won” until 1700. Even today, it ranks eighth, and it probably won many more battles that either weren’t recorded or aren’t easily accessed.

You can also peer into Rome’s battle history with this corresponding “Geography of Violence.”

Rome won, more or less, for eight centuries. It won because its system worked better than its rivals. Yet, for all its recorded victories, Rome has a few spectacular defeats that are still well-known today. Maybe these worst of defeats are notable because they stood in such contrast to Rome’s record of victory. Here are 5 of these worst Roman defeats.

Marcus Licinius Crassus might have been the wealthiest man in Rome, but there was one thing that Romans valued far beyond wealth – military fame. In that department, he was being outdone by his partners in the First Triumvirate, Gnaeus Pompeius Magnus and Gaius Julius Caesar. Crassus’ only notable victories were over Spartacus – but he had only defeated slaves, which made those victories count for less.

Seeking something greater, Crassus secured a governorship over the province of Syria and intended to invade the Parthian Empire to the east, to gain more prestige and riches. The move was deeply unpopular even among the militaristic Romans.

When Crassus entered Parthian territory, he went straight into the desert, probably hoping to mimic Alexander the Great. Unlike Alexander, he wasn’t as mindful of his water supplies and now found himself on terrain perfectly suited to the mostly cavalry army of his enemy.

Crassus ordered his men to form a square. The Romans went on to get pounded by Parthian horse archers and smashed by their cataphracts. It was as close as any ancient battle got to shooting fish in a battle. According to Plutarch, 20,000 Romans had been killed and another 10,000 captured, while the Parthians only lost a few men. These figures are reasonable. Carrhae was one of the most lopsided battles in antiquity. 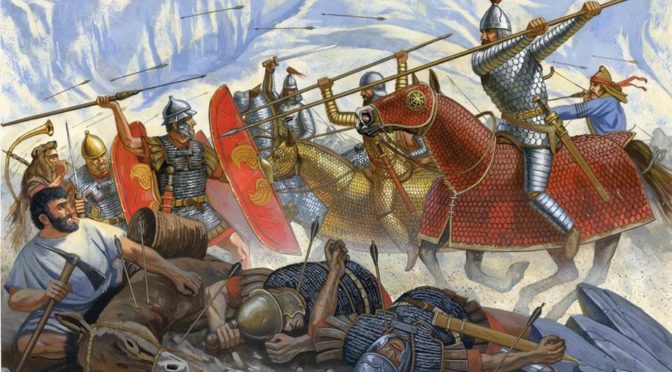 It’s one of the most famous battles in antiquity for a reason. Hannibal’s masterpiece was arguably the greatest tactical feat of all time. Unfortunately for the Romans, it would be their worst tactical defeat.

The Roman army was trained to crush everything in front of it. Having raised an army of twice the normal size to deal with the annoying Carthaginian, Rome’s strategy was to finally catch Hannibal in open country and destroy him. Unfortunately for the Romans, Hannibal, with his smaller army, would turn their strategy against them.

Gradually giving way in the front at Cannae, Hannibal’s crescent formation began to suck the Romans in. Before they knew it, they were enveloped on both flanks, while the crack Numidian cavalry, which had beaten the inferior Roman cavalry from the field, returned to encircle their enemy.

With the legionaries packed into a giant sardine can, they had no room to move. Most of the men simply had to wait until it was his turn to die. The usually reliable Polybius gives casualty figures of 80,000 with 70,000 dead.

Hannibal wasn’t able to turn his tactical masterpiece into effective strategy, but Cannae was probably the single darkest day in Rome’s history, and indelibly left its stamp on the Roman man’s mind as the worst of his defeats. 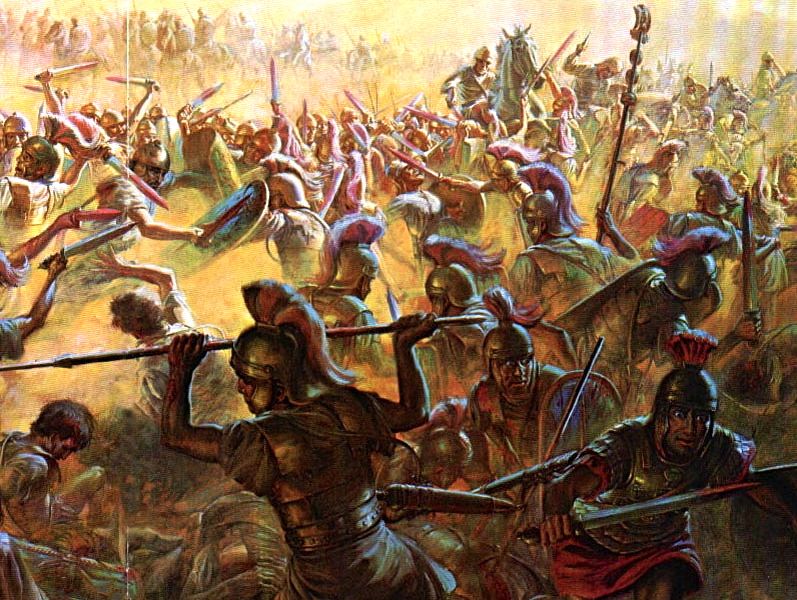 Though it’s comparatively obscure to the other of Rome’s worst defeats, the Battle of Arausio against the Cimbri and Teutons was one of the worst tactical disasters in the Eternal City’s history. According to some of the ancient sources, the casualty count was comparable to that of Cannae.

The actual details of the battle have mostly been lost, but there was evidently dissent between the two Roman generals in the area, the proconsul Quintus Servilius Caepio and the serving consul, Gnaeus Mallius Maximus, who outranked him. The sources generally blame Caepio as being the more uncooperative of the two.

Caepio apparently launched an attack uncoordinated with Maximus. With the Romans already being outnumbered before the battle even began, this attack was beaten back by the Cimbri. Having defeated one Roman army, the Cimbri advanced against Maximus and annihilated him. It was all the easier, given that Rome’s forces were camped on the Rhone River, leaving them nowhere to retreat. Only a few made it out. One of them was Quintus Sertorious, who would go on to be one of Rome’s greatest generals, but that’s a story for another day.

Arausio produced panic in Rome. Always leery of migrating tribes to the north, The Romans elected their best general, Gaius Marius, as consul, and, violating precedent, would keep doing so until the northern tribes had been completely defeated. In this way, the disaster at Arausio hastened the death of the Roman Republic, as it permitted unusual power to accumulate in the hands of one man, and Marius would later turn that power and prestige against Rome itself.

The Roman Empire had experienced struggles in the third and fourth centuries, but it was still the strongest military force in the Western world. The Goths north of the Danube, fleeing the terrifying Huns, begged the Eastern Roman Emperor Valens for protection. He agreed, permitting them to come across the Danube into Roman territory, but they were badly mistreated and rebelled.

A confrontation between the two sides came in 378 when the Romans intercepted a Gothic march on the city of Adrianople. The Western Roman Emperor, Gratian, was moving to join Valens and his army, but jealous of his more popular nephew and believing that victory would be an easy feat, he decided against waiting. He wanted the glory for himself.

The belief that victory would be easy infected the Roman ranks, too. A few overeager units attacked the Gothic infantry without orders. The uncoordinated attack left the Roman formations vulnerable, leaving them prey for the Gothic cavalry when they returned. Pressed on all sides, it was a slaughter. Most estimates put the casualty count in the 15-20,000 range, including Emperor Valens.

While these figures don’t approach the likes of Cannae or Arausio, the Battle of Adrianople was a turning point in history. Though its importance is overstated, it nevertheless showed the decline in Roman military effectiveness. The gap between Rome’s military and its “barbarian” opponents had closed. Instead, Rome was required to accommodate “barbarians” in its territory, and the Empire became more dependent on these “barbarians” for defense. Though these changes were ongoing before Adrianople, the disaster accelerated them, particularly in the Western Empire.

More territory was given to “barbarians” as a result of Rome’s decreasing effectiveness on the battlefield, leading to the dissolution of the Western Empire a century later. Strategically, Adrianople was one of the worst defeats for Rome. 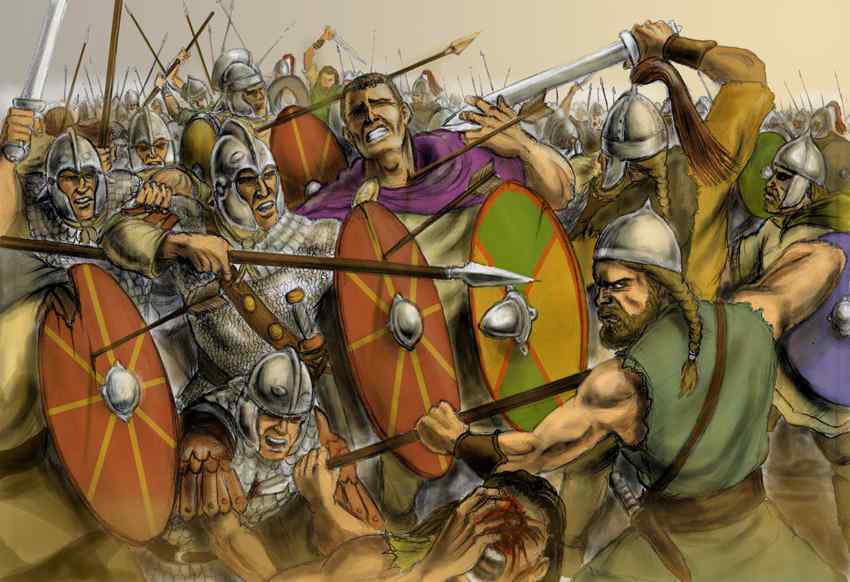 1. Battle of the Teutoburg Forest (9)

In September of 9 AD, three of Rome’s best legions seemingly vanished in Germania without a trace. Very few of the men managed to straggle back across the Rhine into Gaul.

Varus, the governor of the new province of Germania, was led into an ambush by the Germanic chieftain Arminius, who guided the legionary column into the inhospitable Teutoburg Forest. The dense woods, steep ravines, and marshes meant that the Romans couldn’t deploy and were massacred.

When Augustus heard the news in Rome, he supposedly beat his head against the wall and screamed out “Quintilius Varus, give me back my legions!” He would do this again and again for years until he died.

All attempts to permanently expand the Empire east of the Rhine were halted. The Romans returned under Germanicus, conducting punitive expeditions, but they abandoned any attempt to turn Germania into a province, preferring instead to keep it as a tributary territory.

Aside from the dramatic effects this would have on the evolution of the language and culture of Germany (and of Europe), an independent Germania left a potentially hostile population near the heartlands of the Empire, and a much longer border between the Rhine and Danube to defend, which would sap Rome’s military effectiveness in the coming centuries.

For these reasons, the massacre in the Teutoburg Forest was the worst of all Roman defeats. 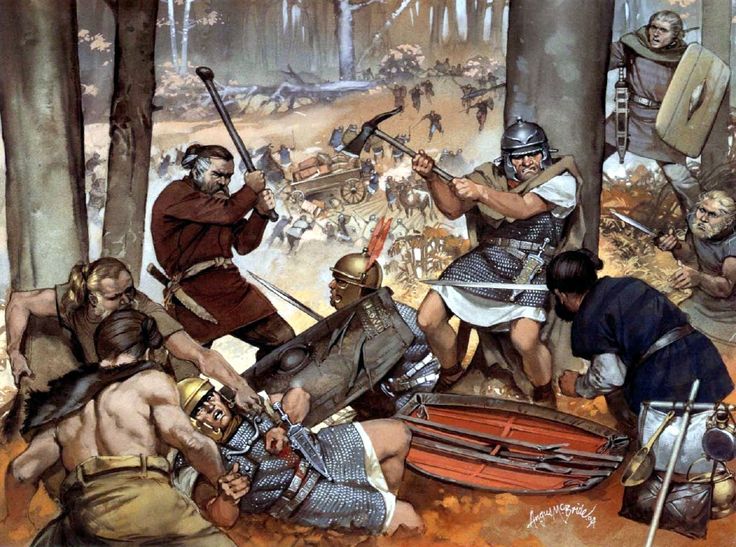 Prevent yourself from suffering shattering defeats by reading Stumped.