It was the crest of a tidal wave of tension, a climax which highlighted the polar opposition of their two characters. Standing in the blue corner was Frieza, the tyrant that had crushed the hopes of the galaxy, a monster with depths of power both unknown and frightening. Fighting out of the red corner was Goku, a hopeful, jovial soul that was the last survivor of a people that Frieza had exterminated.

It’s these elements that made Goku vs. Freiza one of the greatest fights I’ve ever seen in any medium. Even if you aren’t a fan of Dragon Ball Z, it’s a fight well worth studying. Storytelling is a crucial skill to master in the 21st century. It’s the key to sales and seduction. The Goku vs. Freiza saga, specifically on Namek, is one of the most well crafted you’ll ever see.

Specifically, DBZ does such a brilliant job with this battle by using the following elements…

Together, these techniques create a full, rich narrative technique that you can learn from in creating your own stories.

The lives of Frieza and Goku begin to intersect after the latter’s battle with the Saiyans Vegeta and Nappa. Goku defeats them both, but his friends Yamcha, Chaozu, Tien, and Piccolo all died during the fighting. To bring them back to life, Goku, his son Gohan, and his friends Krillin and Bulma must go to Namek to retrieve the Dragon Balls and make a wish for their revival.

Unfortunately, the former sustained serious injuries during the fight with Vegeta, so he will need to heal up and rejoin the rest later.

After their arrival on Namek, Goku’s friends learn about a figure named “Frieza.” They don’t see him initially. They just learn that he’s a horrible monster – infinitely superior to the already frightening figures they come across on their journey, like Dodoria, Zarbon, and the Ginyu Force. Like them, Frieza and his forces are on Namek looking for the Dragon Balls, but in Frieza’s case, he wants to wish for full immortality, so that he can keep the galaxy crushed in his iron fist forever.

Goku and his friends see the destruction that these people have brought to Namek. They’re all terrifying, even to Vegeta, and yet, they’re just senior officers under Frieza. Goku defeats Captain Ginyu, who had billed himself as the second strongest fighter in the universe, but it’s all just a preview of things to come.

To this point in DBZ, we still haven’t seen Frieza fight. We’ve only heard what he’s capable of. That’s about to change. We will now see in full force just how terrifying Frieza is, but it isn’t time for the full main event just yet.

Injured from his fight with the Ginyu Force, Goku rests and heals as Frieza approaches. The climax will have to wait for later. Vegeta fights instead, but DBZ leaves its audience knowing that he’s doomed.

This part of DBZ sets the stage for the climax by building up the antagonist through the use of mystery. The good guys at first only hear rumors about the bad guy, but those rumors get progressively more dreadful, creating anticipation in the audience for events to come. The contrast between the main antagonist and his henchmen, and the knowledge that the latter makes the former look like ants, add weight to the rumors.

In effect, Freiza’s coming is the first disaster in the three-act formula of storytelling. He’s been promoted as a monster in the first act. Now we have to see him in action. Hearing about him is no longer enough if we’re to understand the truth. Thus, the second act begins. 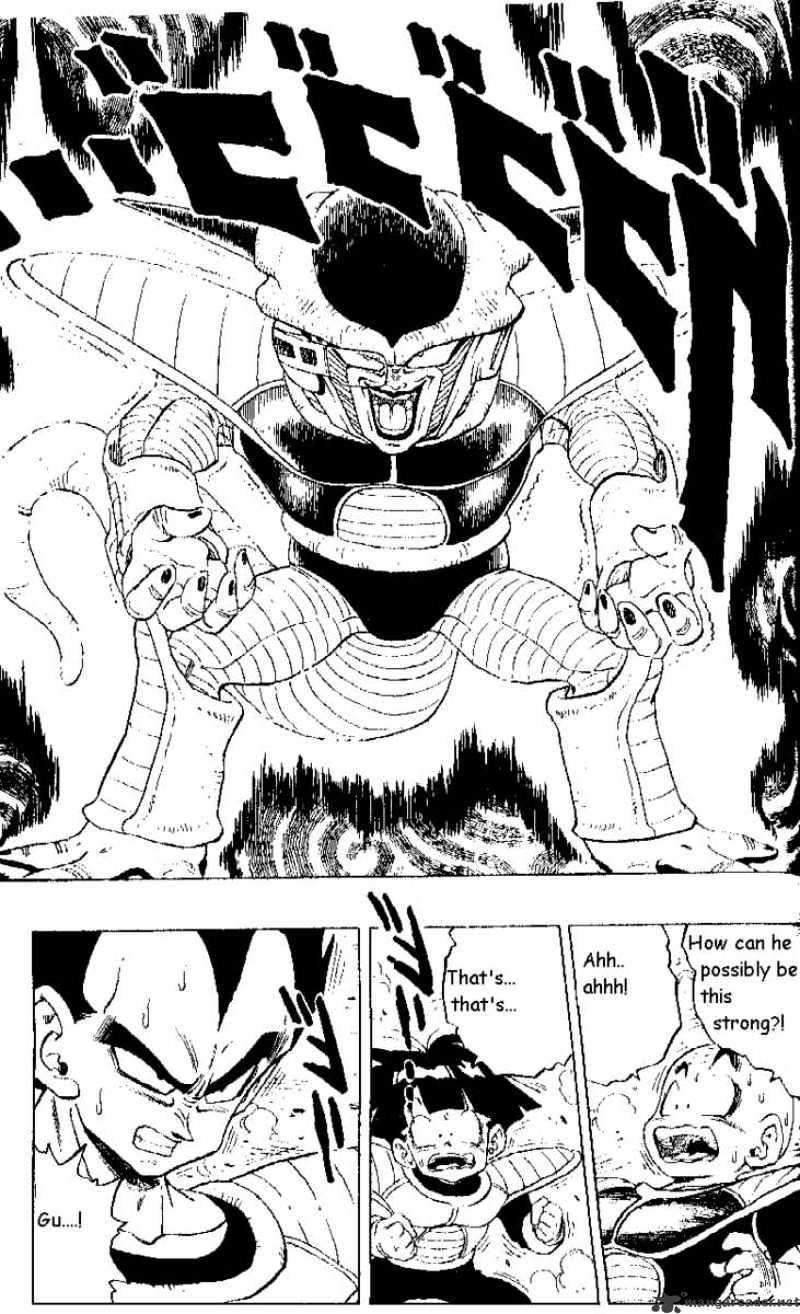 
The terror of the universe stands out compared to his goons. Next to them, he looks diminutive and less tough. Vegeta knows better. He’s terrified. Nevertheless, through the use of the Saiyan ability to get stronger after a near death experience, he feels more confident.

The fight begins, and Vegeta is actually doing well, but Dragon Ball Z now gives us the shocking truth – this was only Frieza’s first and least powerful form. He has a second…

These transformations, getting progressively stronger, serve to highlight just how hopeless the situation is for the heroes. Every time they think they have some kind of advantage over this monster, it’s snatched away by yet another surprise. In fact, the villain’s transformations are the second disaster in the three act structure of Dragon Ball Z’s Namek story. They’re demoralizing and serve to highlight the Goku vs. Frieza fight in greater relief.

Kind-hearted, gentle, and grilled in a never-say-die attitude, Goku is hope itself. Frieza is the antithesis. He kills hopes. He crushes people. He cares about nothing but his own power. The entire Namek saga was about building this contrast. Now these two opposites are at last about to fight.

Vegeta raises the stakes a full order of magnitude with an ugly revelation – Frieza was the one responsible for destroying the Saiyans. As Vegeta dies, he does so with a dying wish – that the tyrant who exterminated the Saiyan race falls from the hand of a Saiyan. Only one person is capable of doing that now. 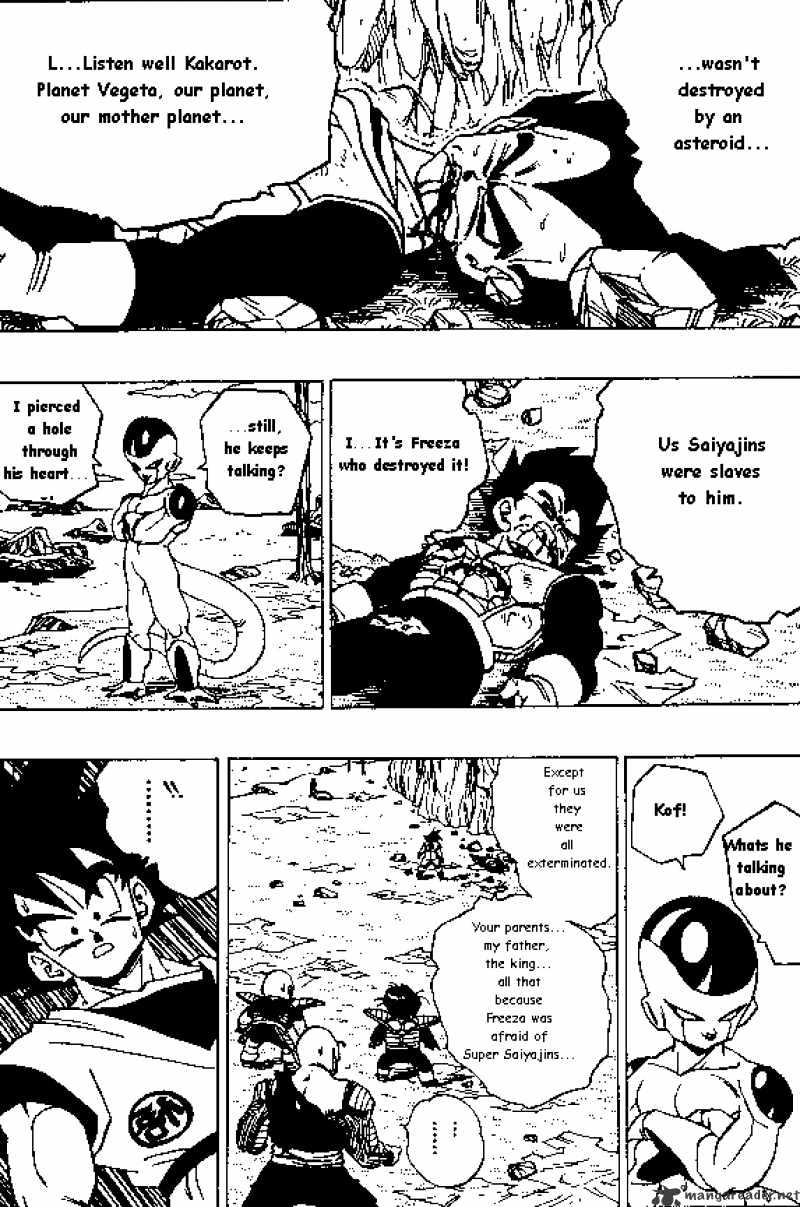 It’s another burden our hero needs to carry. The odds are now stacked even more against the babyface as he does battle with the monster heel for the title. The main event on Namek has been set.


Taking up the Saiyan battle standard isn’t a responsibility that he wants. He had previously done everything he could to run away from his Saiyan identity, so disgusted was he with their antics on Earth. Yet, as Frieza gets closer to revealing the full extent of his power, Goku’s options are narrowing.  His best shots, the Kaioken x20 and the Spirit Bomb, failed. He’s even on the verge of quitting, before someone talks sense into him.

Still, defeating Frieza would take more than Goku then had, and things got worse. Frieza kills his best friend, Krillin, right in front of our hero’s eyes. He had to stand and watch, helpless. The fight was basically over as Goku ran out of options.

The story had reached its third and biggest disaster. The hero had failed. He needed a miracle. There was only one glimmer left – the reason why Frieza had exterminated the Saiyans – the legend of the Super Saiyan. The hero’s only hope remaining was that the legend was true.

He now needed to come into full contact with his Saiyan identity if he was going to win this fight. Whether he wanted to or not, he had to accept who he is and avenge his people.

Part of that meant doing something he wasn’t accustomed to. Like Vegeta, he embraced his rage and unleashed pure fury after Krillin’s death. His hair turned gold and his eyes blue-green. His power increased dramatically. The miracle, the way out of the third act, appeared before our eyes.

The myth was true, after all! A Super Saiyan had been born.

And, in the best moment of DBZ, Goku embraces his identity in full. Like Achilles, he now had only one thing on his mind – Frieza.

The final battle is brutal as the tyrant needs to unleash his full power and even a blast that will destroy Namek to level the odds in his favor, but to no avail. His past has finally come back to haunt him and he needs to pay the piper. The Saiyan has triumphed.

Yet, just because Goku has won, doesn’t mean that he can go back to being the same person he was. He has accepted his Saiyan identity now. It would dominate the rest of the Dragon Ball Z story. As always, war leaves the victor changed as much as the vanquished.

Develop your characters this way. Create contrasts between hero and villain. Build the latter up into a hated figure that inspires fear and dread with seemingly no way out. Then give him his comeuppance. It’s worked for thousands of years for a reason, but too many people ignore it.

Learn more about the power of contrast in persuasion by reading Stumped.