This is a guest post from Jared at Legends of Men. He primarily writes about masculine literature and relationships. Because we live in an age of mass hysteria, and an outrage-based society, I have to take the time to put the disclaimer that these are his views and not necessarily my own. I leave the rest to him.

Most people have heard of the Ancient Greek myth of Orpheus and Eurydice. It’s a great story with several morals of its own. Despite the fame of Orpheus’ descent into Hades, it’s not the most important story in his life. Orpheus was a demigod with an interesting history, one that demonstrates the nature of evil and how to fight it.

Orpheus’ parentage is a bit of a mystery. It’s agreed that his mother was the muse Calliope. His father is believed to be the Thracian King Oeagrus. Some speculate that Orpheus’ father was the god Apollo. When Orpheus was born, Apollo laid a magic lyre next to his crib. It had nine strings, one for each of the muses.

Orpheus grew up to be a brave man and a remarkable musician. He was interested in the story of the golden fleece. When Jason assembled a crew of 52 heroes to travel through the Hellespont and retrieve the golden fleece, Orpheus went with them. His exceptional musicianship proved invaluable to the expedition. He lulled the dragon guarding the golden fleece to sleep so that the Argonauts could take it from the tree on which it hung. With the fleece in hand, the Argonauts returned home, but there were more challenges.

The most important of these is often the one least discussed. While traveling back through the Hellespont, the Argonauts heard sweet sounds from the sea. They didn’t know what it was, but they were instinctively drawn to the music they heard. It was the Sirens’ song. The Argonauts didn’t realize that they were being drawn to their own graves. Orpheus, however, knew what laid at the heart of the siren song.

His divine sense of music warned him of the evil behind the Sirens’ song. How did he save the Argonauts from their doom? Did he draw a bow and shoot arrows at the Sirens? Did he grab the mast and steer the Argo away from the sirens? No. Instead, Orpheus fought the Sirens the only way one can fight evil.

Orpheus drew his magic lyre and performed a song so beautiful, so moving, that the Argonauts forgot all about the Sirens. The Siren song still came from the sea, but the Argonauts were enraptured by the beauty of Orpheus’ music. With Orpheus still strumming his lyre, the Argonauts steered back on course to safety.

The Nature of Evil

Evil cannot last when it is attempted through revolution. Despite the horrors behind Stalin’s Russia, Pol Pot’s Cambodia, and Mao’s China, that evil died before it spread. Nobody from those countries longs for the days of death and murder and mayhem (except for the unabashedly evil). When evil is attempted through revolution, it is doomed to fail.

Evil is successful when it is normalized, when people long to participate in it. The best word to describe it is insidious.

The Sirens demonstrated successful evil. They lured sailors in with the beauty of their song. Sailors weren’t terrified by the Sirens, nor were they awed by the strength of the Sirens. They wanted to be with the Sirens. It was an uncontrollable urge that compelled them to do something they knew they shouldn’t do. The Sirens made evil attractive.

Orpheus alone knew how to fight it. He knew that the insidious beauty of evil most be overpowered with the inspirational beauty of good. He had to make the righteous path more attractive than the insidious path. In doing so, the Argonauts were freed from the Sirens’ song and longed only to do good.

They only way to fight evil is to make good more beautiful, more attractive, and more powerful. This is how groups with a sense of master morality endured for as long as they did. They didn’t celebrate sin, they glorified good. Orpheus successfully starved evil and saved the Argonauts using this method, the only method that can effectively fight the forces of evil. 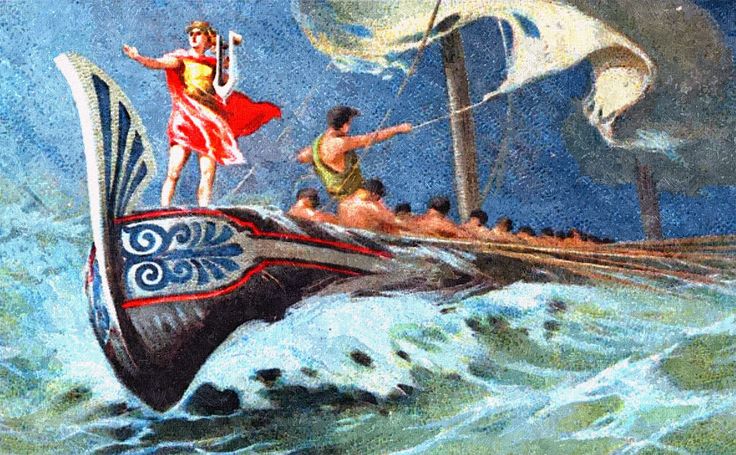 In our lives and our society, when we feel like the world is going to Hell in a handbasket, we must remember the moral of Orpheus and the Sirens. We must fight evil with beauty. We must show our fellow man that good is not oppressive but enlightening. We must show that man is free only when he is free of his vices, not when he has license to succumb to them.

Only in that way, can we make the world around us good.