Your fate is determined by two things – your fortune and your character. One is uncontrollable, but the other can be guided, molded, and channeled to make good fortune likelier. This is the major theme of Cornelius Nepos in Lives of the Great Commanders and it’s similar to Scott Adams’ idea of a talent stack in How to Fail at Almost Everything and Still Win Big. Ancient writers like him were more sophisticated than we moderns give them credit for.

Now Quintus Curtius has released the first new translation in many years, bringing the writings of Cornelius Nepos up to date for the 21st century reader. His service in doing this is apparent. In his introduction, Quintus Curtius notes that Cornelius Nepos has gone from “universally known to universally unknown.” Prior to the decline of classics in the 20th century, “school editions” of Cornelius Nepos were produced, but that’s long gone. Even I, who had been reading classical authors since my early teenage years, had never heard of Lives of the Great Commanders before Quintus Curtius translated it. That shows how obscure it has become, much to our detriment, because if there’s one thing we need to learn these days, it’s recognizing our limitations to fortune, and developing good characters with that in mind.

There’s one passage on the sketch of Pelopidas that sums up perfectly our modern folly:

An overabundance of confidence is often attended by a terrible calamity.

In this case, the pro-Spartan junta then ruling Thebes had reliable intelligence that a group of exiles were planning a patriotic coup and had arrived in the city, but were so consumed by their drinking party that they refused to heed it. The result was their deaths and the collapse of their regime.

This one sentence summarizes our situation perfectly. Cornelius Nepos notes in another biography that being wiser in times of good fortune is a rare trait, one only shared by the most extraordinary men. We should always seek to mold our characters in line with that exalted pantheon.

The work is one which highlights brief biographical sketches of the lives and deeds of generals from various nations (mostly Greek, but some Persian and notably, Hamilcar and Hannibal Barca), from the fifth to the third centuries BC. One of the strengths of the work is that Cornelius Nepos is a good writer who doesn’t overwhelm his readers with long tangents or digressions. The biographies are compact and highlight the important parts of his subjects’ lives and characters.

When you begin reading it, Quintus Curtius notes that Lives of the Great Commanders is really just part of an even longer work. Cornelius Nepos originally wrote biographies about kings of foreign nations, foreign historians, Roman historians, Roman generals, and many more. Unfortunately, all of these other sections have been lost. Only the section on the foreign generals survives in its entirety, the section which we know today as Lives of the Great Commanders. There are a few fragments and small chunks about the Roman historians that are included in Quintus Curtius’ translation, but the overwhelming part of the work is lost.

Does fortune or character determine fate?

Cornelius Nepos writes in the tradition of Herodotus, who notes that fortune’s wheel always turns – no matter how good or bad you might have it. One of the starkest examples of a fall from grace came from Dion, the commander who overthrew Dionysius, the tyrant of Syracuse, and won the acclaim of the people:

Fortune, with her predictable inconstancy, conspired to overwhelm the man whom she had extolled only a short time before. For when Dion’s wife – who had been given to another man – was returned to him, and he was making efforts to restore to virtue the son that had fallen into moral corruption, he was forced to endure that son’s death, the most terrible blow possible for a parent. After this, antagonism began to grow between him and Heraclides, who assembled a faction to oppose Dion because he could not bring himself to concede the leadership position.

This created civil strife and Dion was ultimately murdered pathetically in yet another coup. Fortune’s wheel had turned on him. No one mourned their former savior. His misfortunes caused him to react in ways that turned him into a cruel, decadent tyrant, just like the one he had overthrown.

Dion’s fate was the most stark in Lives of the Great Commanders, but it’s full of lessons in character and power, and how the two interact. With Dion’s example, we see someone letting himself go in response to great misfortune, leading to his own moral corruption and fall from power. He was the opposite to someone like Caesar or Marlborough, who accepted their misfortunes and grit their way through them, keeping their good traits intact and not lamenting unhealthily at the cruelty of the universe. Surrendering to this impulse, though tempting, is the quickest way to make yourself vulnerable, cut yourself off from success, and live a depressing existence.

All successful people overcome manifest unfairness in one form or another.

But what makes Lives of the Great Commanders go above and beyond is that we also see people who fell from power and suffered calamity through no fault of their own, other than their success.

We see how the great Persian commander Datames became embroiled in “scandal” after his talent outshone jealous courtiers of the king:

Although Datames earned a great deal of royal goodwill for his fast response, he also became the focus of more than a little malicious envy from the courtiers who orbited the throne. They knew that this man was more respected than any of them. For this reason they agreed among themselves that he must be removed from the picture.

And so Cornelius Nepos shows us the beginning a long ordeal that finally ended in Datames’ death, after years of his former friends trying, but repeatedly failing due to their inferiority.

Robert Greene’s 48 Laws of Power comes to mind when reading about Datames. Had he made some deliberate, but not threatening, mistakes and admitted some flaws, he might have saved himself. Lives of the Great Commanders is a distant ancestor of the modern classic and shows that human nature doesn’t change.

Those who want to have a good life need to understand it. This book helps.

Lives of the Great Commanders isn’t all doom and gloom. It also shows us those who lived well until the end, keeping their characters intact and never suffering irreversible misfortunes because of it. The most famous of Theban commanders, Epaminandas, rose to power, brought his city to the preeminent position in Greece, and was loved instead of feared throughout his career.

Timoleon is another example of a man who had it all, but refused to become a tyrant after overthrowing one. He instead lived out his life as a private citizen, but one who was consulted constantly, and who’s council always prevailed. He can almost be termed as a wise, retired king without the title. As such, no intrigues or conspiracies formed against him. His biography might be the most revealing, though he’s one of the least known figures.

The sketch of the Roman historian Atticus, which has survived, was also included by Quintus Curtius. Atticus’ sketch is arguably the most important, because it showed how he successfully navigated the turbulent time period of the Roman Republic’s final collapse, where affluent people, including Cicero, were being killed left and right in purges. Atticus not only lived, but somehow made friends with all the warring factions and kept himself above them, a remarkable feat that illuminates mastery of power at its highest level.

In his translation, Quintus Curtius has revived an author that was languishing in obscurity, and brings his lessons to light for a generation that badly needs them. Like all of Quintus Curtius’ translations, it’s thoroughly annotated to give the reader maximum understanding of the language and time period. 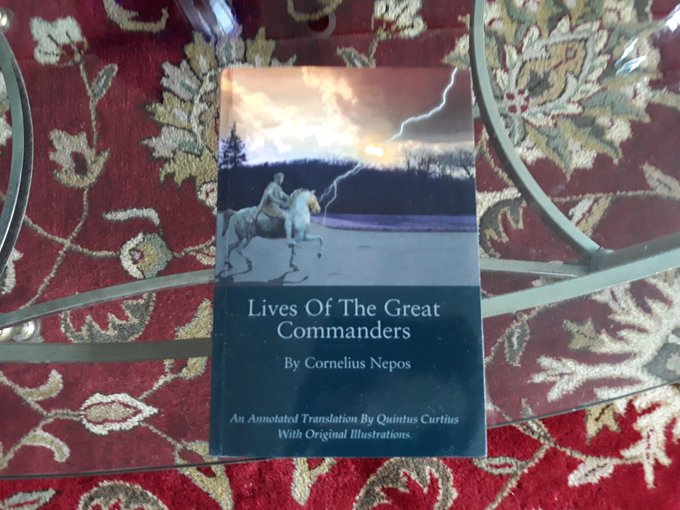 You can read Quintus Curtius’ translation of Lives of the Great Commanders here.

And if you liked this review and want me to write one for you, hire me by reaching out at libertas@masculineepic.com.