As pandemic world continues, we have seen an ominous development. The response to it is no longer driven by science and data, but by woke virtue signaling and preening. Woke “elites” are racing each other to see who can most impose the harshest lockdowns and best imitate their Chinese Communist idols. It has quickly become a social taboo to question the lockdowns. The phrases “social distancing,” and “stay home and save lives,” have become shibboleths to distinguish the anointed from the benighted, as has wearing a mask everywhere you go. They are the 2020 addendums to the woke cultural Test Acts.

It’s best in times like this to go back in history and see how these kinds of mass panics and hysterias, with their inevitable cultural preening, play out. To be clear, the Chinese coronavirus isn’t a mass hysteria, but the response to it at this point is similar to one.

The “Test Acts,” which were passed in England in the 17th century, are an apt frame for this situation, as indeed, they have been throughout this entire woke nonsense period in our history. So let’s imagine that we have a time machine and go back.

England was in a precarious position in the middle of the 17th century. The country had just emerged from a brutal period of civil war, military dictatorship, and near-anarchy. Charles II was invited back to become king in what became known as the Restoration in 1660. Though he was king, and in theory had the same powers as before the war, the truth was that the country had been changed forever. Being an astute politician (very much unlike his father and grandfather), Charles II recognized this and understood his own limitations, and those limitations would now butt up against a frenzied national hysteria.

Ever since Henry VIII broke with Rome, England had become more and more hostile to Catholicism. During Elizabeth I’s reign, with a Papal Bull of her excommunication, anti-Catholic sentiment and repression grew, but it was in the mid-17th century where it reached the point of hysteria. As with many mass hysterias throughout history, the anti-Catholic sentiment in England ballooned when the “problem” was declining in importance. As Catholics had been persecuted for a century since Elizabeth’s time, they were very few in number in the country during the time of the Restoration. That the executed Charles I talked of bringing over a Catholic army from Ireland to put down Protestant English subjects greatly accelerated the matter. You can learn more about that particular point by subscribing to my Patreon and looking up the Battle of Naseby. The primary source is linked there.

Along with the Catholic Louis XIV’s aggressive expansionism on the European Continent, this atmosphere created a feeling in England that there was a Catholic lurking under every bed, looking to prey on innocent Protestants, despite the truth that it wasn’t so. Charles II knew that it wasn’t so, all too well, in fact, but in this atmosphere, with the Monarchy precarious, he couldn’t say so. He had to go along with the Anglican Protestant consensus that had restored him to his throne, and so, reluctantly, he gave Royal Assent to a series of laws known as the Test Acts.

The Test Acts and the “Popish Plot”


The Test Acts were originally passed in the early 1660s and amended over time. The basic crux is that they forced those seeking office in England to periodically reaffirm that they weren’t Catholics through a public rejection of “Popish” theology. The most famous, for example, was to take an oath rejecting the doctrine of transubstantiation. As long as this compelled speech was given, there would be no problems, but refusing to take the oath would result in disqualification.

The most famous instance of someone refusing to take this oath was Charles’ brother James, the heir presumptive to the throne, since Charles had no legitimate children. James’ refusal to comply with the Test Acts in the 1670s revealed him as an open Roman Catholic.

This revelation turned the already rife anti-Catholic hysteria in England into a feverish frenzy. It would see its peak with Titus Oates and his “revelations” about a “Popish Plot” from 1678-81. Oates, ironically a former Jesuit priest himself, claimed that there was a vast conspiracy among Popish agents to assassinate Charles. The King, blessed with astute political and social skills, understood that the whole thing was nonsense, but the hysteria was at such a fever pitch that he had no choice but to go along with it, ordering investigations and inquiries. He was forced to send James away from England, and fight for his brother’s right to succeed him through the Exclusion Crisis. His enemies in Parliament seized on the hysteria to attempt to remove James from the line of succession.

No one was safe, as seen in the incident with the “Five Catholic Lords” whose lives were ruined on Oates’ accusations. These men were sent to the Tower of London and only cleared their names years later. Others weren’t so lucky.

As one would expect from a mass hysteria in those days, there were many investigations which led to executions. The Test Acts were amended to prevent Catholics from sitting in Parliament. Those who hung on to their Catholic faith were subjected to harsh penalties and forbidden from traveling near London without permission.

In this way, the Test Acts became an important act of signaling – those who adhered to them were spared legal and social penalties – they couldn’t be part of the “Popish Plot.” Those that didn’t were in a bad way.

Today, one must acknowledge our own cultural shibboleths to get access to social, and increasingly, economic capital (see banks refusing to lend to people of certain persuasions, or platforms like PayPal cutting them off). Whether it’s “slavery was the foundation of America,” “men can have periods,” or now, “staying home saves lives,” we have an ever-expanding list of oaths we must take, affirmations or denials that we must make, or risk blacklisting (and maybe jail).

Compelled speech is a linchpin of any tyrannical regime. 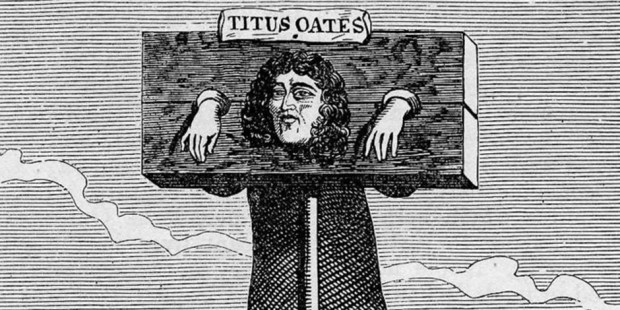 There is a happy ending to this particular story, though. As in the case with so many demagogues, Titus Oates eventually went too far. The hysteria peaked when he went so far as to accuse the Queen, Catherine of Braganza, and her physician, of trying to poison the King. With this, Charles’ tolerance began ebbing, and as with so many other things, the King was ahead of the curve.

The accusations and executions of innocent people eventually broke the public’s tolerance of Titus Oates as well. Parliament still demanded his presence during the Exclusion debates, but the height of his power had been reached. He was eventually thrown out of the palace. Then fortune’s wheel turned fully against him when James II came to the throne. He was prosecuted, imprisoned, and, though he was eventually pardoned by William III in the aftermath of the Glorious Revolution, he never returned to power, and died in obscurity.

Though Titus Oates and the Popish Plot were exposed, the Test Acts remained in force until the 19th century. They upheld oppression and hysteria until then, though anti-Catholic sentiment would never again reach the fever pitch it did with the Popish Plot.

Unfortunately, the lesson of the Test Acts and the Popish Plot is that such cultural in-group signaling and blacklisting of the out-group can last a long time. To make matters worse, we don’t presently have leaders like Charles II, who understand shams and are prepared to defend the interests of their people as best they can.

Instead, Titus Oates is now king. Every year, it seems, brings another Popish Plot. This year’s Popish Plot would have to be the fear that people who want to provide for their families are intentionally trying to kill those vulnerable to the coronavirus.

But what the whole Popish Plot saga shows us is that these demagogues do eventually get theirs. By riding fortune’s wheel with no good reason, they subject themselves to it, and it always turns. As their characters are baseless, and they advanced through ill-gotten gains, they have nothing left when it does. Spreading hysteria creates no value. When it passes, people see.

It’s satisfying to see the peddlers of the Russia hoax now getting fully exposed and squirming around like worms. I only hope they’ll face ostracism and justice, but for good reason, I’m not optimistic. At least public discourse will be freer of this national embarrassment.

I suspect that, soon, the peddlers of these unending lockdowns (many of them the same people) will also be exposed for the frauds they are.

Until then, learn about mob psychology by reading Stumped.

This chapter was also featured and expanded in Lives of the Luminaries.