“It is easy to make a eunuch out of a man, but it is impossible to make a man out of a eunuch.” So Quintus just related on his brand new TikTok account. On a platform that incentivizes idleness, attention whoring, and plain idiocy, his is a welcome attempt to retake the conversational space. That’s probably why he braved the Chinese spyware and took the plunge. Now more than ever, the message needs to get out.

An anecdote about the philosopher Archesilaus. Don’t try to chase popularity, friends. For it is easy to make a eunuch out of a man.

Similarly, the message needs to get out in print. That’s why Quintus Curtius wrote Digest. Digest is a collection of the essays accumulated at Quintus’ site over the years. The work is actually in line with one of the major themes of his brand that you see repeated in the essays – the perishability of knowledge and the necessity of physically preserving it. Digest is available as an ebook, but undoubtedly, the physical copy is Quintus’ pride and joy. I just happened to have received one as a courtesy. 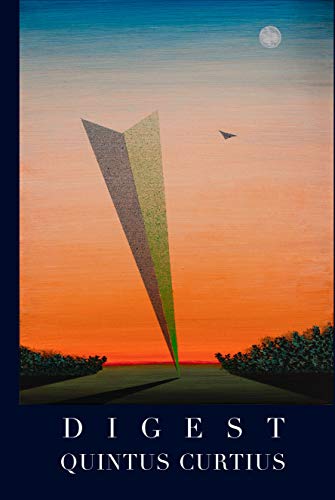 Digest is a long book at about 700 pages. It will take you time to read it. I received it in February, but am only now done. There are some extenuating circumstances why it took me so long. I tend to absorb the knowledge of deep subject matters like this better outdoors than indoors, where I find I’m distracted less. The coronavirus lockdowns put a damper on that for a while.

Aside from the perishability of knowledge (illustrated most poignantly in Petrarch’s encounter with Cicero’s lost On Glory), three other major themes emerge in Digest:

Let’s take a look at examples of all three.

The year was 202 B.C. and the Second Punic War wasn’t going well. Hannibal’s initial blitzkrieg had ended in his spectacular victory at Cannae, but hadn’t translated it into successful strategy. Rome not only still fought, but fought hard, and had decisively turned the tide nine years later at the Metaurus. With Hannibal ground down in southern Italy and with the ascendant Scipio successful in Spain, his options were narrowing.

The inevitable came when Rome, victorious everywhere, finally turned its attention to the Carthaginian homeland. It sent its new prodigy general, Scipio, to invade North Africa and subdue Carthage itself. Hannibal was left with no choice but to return to defend his home.

Before the battle, he met with Scipio, hoping to come to a settlement without bloodshed. Quintus Curtius relates that Hannibal warned his adversary about the fickleness of fortune. He noted that he was in the ascendant at the start of the war, but fortune turned on him anyway. It could happen to Scipio, too, Hannibal cautioned, and said that it would be better for them to come to an accommodation rather than entrust their fate to fortune’s winds. If they did so, Hannibal said, the only thing they could be certain of is that each side would see swords and corpses.

Scipio politely declined Hannibal’s invitation at their meet and went on to defeat the hated Carthaginian at the Battle of Zama, ending the Second Punic War and securing for himself heights of glory no other Roman had yet reached.

Despite this, Hannibal’s warning came true, and fortune would turn on Scipio in the succeeding years. He was forced into a premature retirement and died an embittered man.

This essay is a good reminder that no matter how powerful you are, fortune will turn on you to some degree.

Erasmus’ loses all his money and triumphs

Henry VII was known as a miser. To be fair to him, England was just getting out of the Wars of the Roses and the peace was fragile. He needed money to maintain and rebuild his newly-won realm. Still, his reputation for miserliness lasts to this day, and he reaffirmed an old edict from Edward III that made money trying to be taken out of the country subject to confiscation.

Desiderius Erasmus Roterodamus, better known just by his middle name, was a Dutch scholar from Rotterdam who tried his hand at making a living solely through the pen. This road to success was opened by the dawn of printing, but it was, as it is now, an exceedingly difficult one.

Erasmus nevertheless made some money for himself before he was invited to visit England in 1499. However, getting it out of there proved impossible. The result was that all of his money, the money he had worked hard to amass, was taken from him and he was back to square one.

As you would expect, for a while, Erasmus was demoralized and disillusioned. Nevertheless, necessity is the mother of invention, and he had a resourceful character. Out of his desperation, he came up with his Adagia, a collection of ancient Greek and Roman adages and quotations that could be used as an easy guide for other scholars. The work was a success and continually expanded over the years until his death. The financial tragedy he suffered was the impetus to this, his greatest work.

It is a living example of the Shipwreck of Simonides. A good character can suffer bad fortune and still find ways to win.

Burkentius “profits” from a love of money

Justinian’s wars against the Goths in Italy were some of the most brutal of the early medieval period. Raging for decades up and down the peninsula, the “Gothic War” was a savage conflict where both sides suffered terribly.

During a siege of the town of Osimo, a Byzantine (technically they called themselves Romans, but I’m using the vernacular adage for convenience) soldier of Gothic descent named Burkentius was bribed by some of the inhabitants to deliver a message for them through the Roman lines to the stronghold of Ravenna.

Faking his trip as one of medical necessity, Burkentius complied. However, Justinian’s general Belisarius was the best warrior of his time, and understood that something strange was going on. The garrison at Osimo was holding out for a reason.

To get information, he ordered some of his Slavic troops to capture a prisoner. This they did, and under interrogation, the prisoner revealed Burkentius’ betrayal.

He hid none of it and was burned alive. That is what the love of money, his corruption of vice, did to him. Was it worth it?

This was only one brief essay among many highlighting how unmitigated vices lead to the downfall of men. I highlighted it because it might be the most visceral.

Towards the end of Digest, Quintus Curtius highlights the sad fate of the Library of Alexandria. He notes that Carl Sagan liked to speak of its destruction as a single event where it fell to the mob, but that wasn’t entirely accurate.

Instead, the library was dissipated through neglect over the years and centuries. Nevertheless, the direction Carl Sagan warned us of was right. There was a Year Zero revolution in the late Roman Empire, with the nascent Church obliterating much of classical civilization.

And Sagan’s adage is the same as Quintus Curtius’ warning throughout Digest. Knowledge must be preserved with every generation. We think this is easy now, with digital media, but such media is easy to censor, and we shouldn’t rely on it. He was saying these things throughout essays written in 2017 and earlier.

The themes in Digest matter more today than ever.

So do yourself and your country a favor and buy it, preferably in physical form, now.