“I feel sorry for McKinley,” noted a contemporary observer. “He has a man of destiny behind him.” This phrase gave itself to the name of the penultimate chapter – “The Man of Destiny.” And indeed, after reading The Rise of Theodore Roosevelt, you are left with the impression that he truly was a man chosen by destiny to restore a greater order (what the Egyptians called Ma’at) which had been disrupted by industrialization. He comes across as a protagonist in an epic story spun by a bard rather than a real man. Yet, Edmund Morris’ exhaustive recounting shows us that he was a real man, sometimes of profound weakness, which adds further to his glory and why you should read this classic biography. 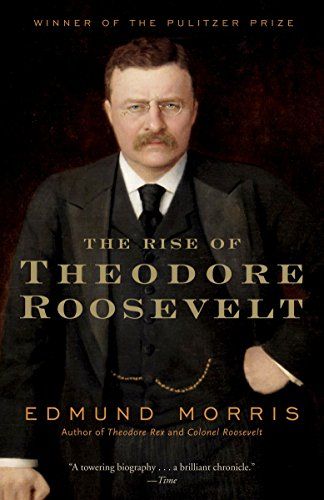 Throughout our lives, we are many different people. You are not the same person you were last year, or five years ago, much less 10 years ago. This fact of life, which “cancel culture” is predicated on ignoring, is illustrated on the back cover of the book, which shows that Theodore Roosevelt was “a naturalist, a writer, a lover, a hunter, a ranchman, a soldier, and a politician who emerged at age forty-two to become the youngest President in history.”

We have gone over some aspects of Theodore Roosevelt’s rise to immortality. His early life prepared him well for it. He suffered terrible tragedies and learned how to steel himself in the midst of reversals of fortune. He had built his reputation nationally long before he entered the nation’s highest office. Edmund Morris goes over all of these things intimately, to the point that you feel as if you are meeting the subject himself. You see early on some of the reasons why Theodore Roosevelt succeeded and why he was so beloved. The sources of his charisma are brought to light in the pages of this biography. One of the more endearing ones concerned how Theodore Roosevelt spoke:

The paper noted sarcastically that Roosevelt’s “maiden effort as an orator” had been applauded by his political opponents; there was a reference to his “quaint” pronunciation of the words “r-a-w-t-h-e-r r-e-l-i-e-v-ed.” (pg. 151)

We are told in the biography that his manner of speaking, with its emphasis on certain syllables and his clicking of teeth, produced a memorable effect. Theodore Roosevelt was not a “natural” orator like Cicero or Julius Caesar. We instead see how he became one in The Rise of Theodore Roosevelt. At times, we are able to note his improvement, as if he were a developing character in a play or novel.

The Rise of Theodore Roosevelt is also an adventure story. We feel the thrill of the hero’s encounters with wild beasts in the wilderness, his bold arrest of outlaws almost single-handedly as he navigated a raging river in the Dakota Territory, and his charge up San Juan hill near the apex of his journey:

Roosevelt: “Then I am the ranking officer here and I give the order to charge.” Another refusal. Roosevelt: “Then let my men through, sir.” Grinning white faces behind him; black men throwing down a barbed wire fence before him. A wave of his hat and flapping blue neckerchief. The sound of shouting and cheering. The sound of bullets “like the ripping of a silk dress.” Little Texas splashing bravely across a stream, galloping on, and on, up, up, up. Another wire fence, forty yards from the top, stopping her in her tracks. A bullet grazing his elbow. Jumping off, wriggling through, and running. Spaniards fleeing from the hacienda above. Only one man with him now: his orderly, Bardshar, shooting and killing two of the enemy. And then suddenly a revolver salvaged from the Maine leaping into his own hand and firing: a Spaniard not ten yards away doubling over “neatly as a jackrabbit.” At last the summit of the hill – his and Bardshar’s alone for one breathless moment before the other Rough Riders and cavalrymen swarmed up to join them. One final incongruous image: “a huge iron kettle, or something of the kind, probably used for sugar-refining.”

His emergence from this kind of Katabasis formed the basis of his destiny. This made him an instant hero, raising his auctoritas sky-high. People of all stripes were clamoring for him to run for Governor of New York later that year – a sure stepping-stone to the Presidency of the United States.

But there wouldn’t be a perfect ending to the story without some unexpected obstacle, a Third Act disaster the likes of which bog our hero down with a seemingly insurmountable challenge. In this case, the Third Act is the Vice Presidency. The Rise of Theodore Roosevelt describes it with epic flourish.

Unlike today, the position of Vice President of the United States was not an important one, and even less prestigious. It commanded no power whatsoever. Its sole purpose was to act as an emergency switch. If that glass wasn’t broken, it sat unused, and forgotten. It was where political careers went to die. People would take the position and never be heard from again.

The problem for our hero was that he was pissing off powerful interests during his time as governor. They wanted to be rid of him. Yet, he was too popular to push out without a big fight. The solution? Promote him into irrelevancy. The mastermind behind this was Thomas Platt, the Republican Party boss of New York State, who had a frenemy relationship with the governor he had helped to install. Platt knew how popular Theodore Roosevelt was and how beneficial he was for the party, but the fact that he couldn’t be controlled grated on him and the corporate interests he aligned with.

Thomas Platt saw an opportunity brewing, because there was popular support to put his frenemy on the 1900 presidential ticket, and he rode those winds, helping to arrange for the reluctant Theodore to not run for reelection as governor and instead join the ticket as Vice President. Just before the inauguration, as he and his retainers left for Washington, he humorously remarked that they were going to “watch Teddy take the veil.”

But destiny was to rear its head in a grim way, which Rise does not gloss over. We see how President McKinley got shot, what the bullet did to his insides, and are even left with the impression that the ailing man might recover from the assassination attempt, but it is not to be. The hero has, in macabre fashion, overcome the Third Act.

Appropriately, Rise ends with the “triumphant” hero overlooking the world:

Here, if ever, was an opportunity to look around him at all these lower hills, and to think of the hills he had himself climbed in life. Pilatus as a boy; Katahdin as an underclassman; Chestnut Hill as a young lover; the Matterhorn in the ecstasy of honeymoon; the Big Horns in Wyoming, with their bugling elks; the Capitol Hill in Albany, that freezing January night when he first entered politics; Sagamore hill, his own fertile fortress, full of his children and crowned with triumphant antlers; the Hill in Washington where he twice laid out John Wanamaker; that lowest yet loftiest of hills in Cuba, where like King Olaf in Smalsor Horn he planted his shield; now this. Would he ever rise any higher? Or was McKinley’s recovery a sign that the final peak he had so long sought would after all be denied him?

Mists rolled in again, and Roosevelt descended five hundred feet to a little lake named Tear-of-the-Clouds, where his party unpacked lunch. It was about 1:25 in the afternoon.

As he ate his sandwiches he saw below him in the trees a ranger approaching, running, clutching the yellow slip of a telegram. Instinctively, he knew what message the man was bringing. (pg. 779-80)

Rise ends here, with the supreme power now vested in its hero, who has, finally earned the opportunity for true immortality. But would he succeed? That is the question Edmund Morris leaves for the next part of the trilogy.

Wonderfully constructed and always engaging, I highly recommend The Rise of Theodore Roosevelt. Click here to get it. It will dare you to make yourself a better man.