That damn cowboy is President of the United States!

Indeed, an assassin’s bullet made Theodore Roosevelt President at age 42, much to Mark Hanna’s chagrin. In an act of macabre irony, Theodore Roosevelt’s earlier “elevation” to Vice President came from an effort to sideline him. His earlier career as a troublemaker simply made him too distasteful to the party machine and its sponsors. Now their machinations blew up in their face. Theodore Rex begins with his hearing the news that he was now President.

This is no mere biography, however. As before, Morris follows Roosevelt as if he were the hero in an epic movie, because indeed, that’s what he was. As we follow the new President on his somber train ride to Washington, we learn of the barely concealed malaise facing the country. We see what he saw – the people working in the coal mines of Pennsylvania, ravaged by Black Lung Disease. We also see immense prosperity and power concentrated in the hands of captains of industry who were accountable to none. It is through this buildup that Morris reveals the 26th President’s core mission:

The consistent features of the political landscape, as he saw it, were fault lines running deeply and dangerously through divergent blocks of power. Potential chasms lurked between Isolationism and Expansionism, Government and the Trusts, Labor and Capital, Conservation and Development, Wealth and Commonwealth, Nativism and the Golden Door. And since the last election, the fault lines had widened. As William Jennings Bryan kept saying, “The extremes of society are being driven further and further apart.”

Roosevelt thought he knew what was causing the underlying drift: a crumbling of Government, the national bedrock. … How, in the meantime, to care for those millions of Americans out there in the twilight? How to articulate their vague feelings that despite general peace and prosperity, something deep down was wrong with the United States? This was his challenge as President: to put into speech, and political action, what they felt in their hearts, but could not express. (pg. 37-8)

Reestablishing a domestic balance of power, and maintaining a foreign one to America’s advantage, would be the principle challenges of his presidency. Theodore Rex takes us along on his quest. 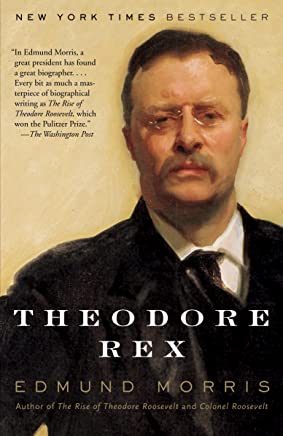 
The new President got his first test early. JP Morgan, fresh off his triumph in creating US Steel, attempted to broker even further consolidation of the railroad industry. In a meeting with Edward Henry Harriman and James J. Hill, he agreed to form the Northern Securities Company. The new trust would control much of the railroad business west of the Mississippi.

Theodore Roosevelt personally liked JP Morgan, but saw this as risking further destabilization of American life. The trusts needed a counterbalance or they would bring the country into dangerous waters. After consulting with his inherited Attorney General, Philander Knox, he brought an antitrust suit against the company. In response, JP Morgan came to the White House to ask what was going on. If there was a problem, he said, Roosevelt’s men and his men should just get together and make a deal.

Still, the Northern Securities suit was a tremendous gamble. Courts had interpreted the Sherman Antitrust Act narrowly. Victory was not guaranteed. Nevertheless, the suit itself sent a shock wave through the land. The word was out – this was a different kind of president than the trusts were used to dealing with. Theodore Rex shows us how Roosevelt seized on the shock and proposed a new Department of Labor and Commerce, with a Bureau of Corporations (the predecessor of the FTC), to force good behavior on the trusts.

The modern “Conservative Movement,” with its substitution of libertarian bumper sticker slogans for deep thinking, typically hates these kinds of regulatory arms. Yet, we see in our own time just how important they are. Left to its own devices, libertarianism trends to a pseudo-feudal arrangement just as bad as government overreach. Roosevelt understood this. “Balance” is the word Morris uses at a crucial juncture in Theodore Rex to describe his approach to governance. Indeed, we see it in play again with the book’s coverage of the coal miner’s strike later in 1902. It is an incident (and philosophy) I cover in my Theodore Roosevelt chapter in Lives of the Luminaries.

One of the reasons Theodore Rex is worth reading is because it gives us insights into problems which mirror those of our own time. It also shows us what real leadership looks like in response to them. We need more of our leaders and would-be leaders to read Theodore Rex, and not woke nonsense.

The United States rose to world power status by the time Theodore Roosevelt took office, but it was not alone. Germany and Japan also rose to first-rate status, and the president needed to deal with these two new kids on the block, as well as the old empires like Britain, France, and Russia.

I have already covered how he diffused the Venezuela situation, which could have led to war with Germany in 1902. I’ll soon cover his handling of the Russo-Japanese War, which served America’s short-term interests but certainly had negative long-term consequences.

Yet, foreign policy actions always have long-term reverberations unintended by their initiators. That is how the great game works. The President was able to mediate a favorable peace agreement that kept American interests intact. The mediation did not come easy, and Theodore Rex takes you through the saga almost as if it were a novel. You see the protagonist’s psychological adeptness in action, teaching the reader a clear lesson in power.

If only our foreign policy “blob” would learn the same lessons, instead of clinging to disastrous theories!


And that is the point of Theodore Rex. It teaches us real leadership in action, and Morris does it with a novelist’s touch. No good story would be complete without a memorable ending. Morris doesn’t disappoint us:

In time, no doubt, the inevitable memorial committee would form, and solemn scholars would comb his works for quotations suitable to chisel in stone. Statute books and official histories would celebrate his administrative achievements: the Monroe Doctrine reaffirmed, the Old World banished from the New world, the great Canal being cut; peace established in the Far East; the Open Door swinging freely in Manchuria and Morocco, Cuba liberated (and returned to self-government just in time for his departure) the Philippines pacified the Navy hugely strengthened, known literally around the world; the Army, shorn of its old deadwood generals, feeling the green sap of younger replacements; capital and labor balanced off, the lynch rate declining, the gospel of cleaner politics now canon, and enough progressive principles established, or made part of the national debate, to keep legislative reformers busy for at least ten years.

But for millions of contemporary Americans, he was already memorialized in the eighteen national monuments and five national parks he had created by executive order, or cajoled out of Congress. The “inventory,” as Gifford Pinchot would say, included protected pinnacles, a crater lake, a rain forest and petrified forest, a wind cave and a jewel cave, cliff dwellings, a cinder cone and skyscraper of hardened magma, sequoia stands, glacier meadows, and the grandest of all canyons.

Less solidly but equally enduringly, he left behind a folk consensus that he had been the post powerfully positive American leader since Abraham Lincoln. He had spent much of his two terms crossing and recrossing the country, east and west, south and north, reminding anyone who would listen to him that he embodied all America’s variety and the whole of its unity; that what he had made of his own life was possible to all, even to boys born as sickly as himself. Uncounted men, women, and children who had crowded around the presidential caboose to stare and listen to him now carried, forever etched in memory, the image of his receding grin and wave. (pg. 554-5)

The question now is – will we get a man of destiny again?

Historical but shockingly relevant, and staged like an epic, I highly recommend Theodore Rex. Click here to get it and learn what real leadership is.