Theodore Roosevelt is on safari in Africa, hunting big game for the Smithsonian. Where the presidency tires out most men, TR only wanted to go more adventures. He needed to, because if he didn’t divert himself, he knew he could make trouble for his chosen successor. This is where Colonel Roosevelt begins. It cleverly hearkens back to the prairie days of The Rise of Theodore Roosevelt while also reminding us of things to come.

Following his safari, Theodore Roosevelt is feted in the capitals of Europe as a hero. In one notable encounter, he meets with Kaiser Wilhelm II of Germany, who he previously confronted in the Venezuela Crisis. Wilhelm seems not to have taken it personally and tries to befriend “the Colonel” as much as he could. Theodore Roosevelt is even treated to a special demonstration of the German army and immediately understands the danger America is in. That will play an important part toward the end of Colonel Roosevelt. 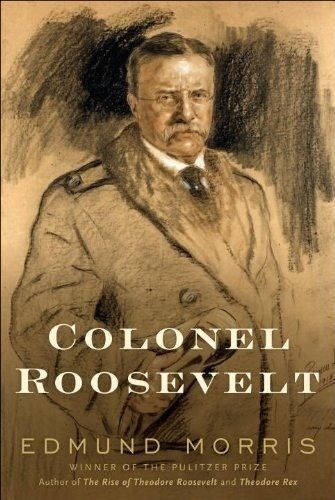 The royal welcome throughout Europe was not just for sentimental reasons. No one believed he had really retired. Only in his early 50’s, everyone expected him to return to the office he had voluntarily vacated. People across the pond did too, because he received a hero’s welcome when he finally came home in 1910. From that point forward, the allure of politics was as strong as a black hole’s gravity. Colonel Roosevelt shows us that TR had crossed that event horizon the moment he returned to America. From that point on, his “hat was in the ring.”

The Colonel might have personally selected William Howard Taft to succeed him, but he wasn’t proving popular with the American people. A humbler man who “just wanted to be loved” often finds it difficult to succeed a force of nature like Theodore Roosevelt, no matter how well he may have been doing in fact. Taft actually did more to tame the trusts than his predecessor, but because of the power of the Colonel to draw attention, he was seen as a failure.

Theodore Roosevelt pledged a platform that was more progressive (the word carried a different meaning than it does today). This included a democratic nullification on court decisions, which horrified his former friends in the Republican Party. In hindsight, when we read Colonel Roosevelt, we see that his attempt to return to power in 1912 was unwise. Timing is everything and the party had an incumbent. Incumbency carries its own innate advantages, no matter how strong the challenger. When Theodore Roosevelt became fond of items his own allies felt were too far out, he strengthened Taft’s advantage in the party machinery, and burned many bridges along the way.

Furthermore, the Democrats finally had a strong candidate of their own that year in Woodrow Wilson, who campaigned on a platform rather like the Colonel’s. The classical explanation of the 1912 election was that the Republican vote got split, but given the similarity of their platforms, it might not be as simple. Either way, the Colonel lost the election, but not before getting shot and still delivering a speech.

Colonel Roosevelt shows that his injuries in this famous incident were more serious than is commonly believed, magnifying his bravery all the more. By a twist of fate, we also see that “there was no better-armored place on his body” than where he got shot:

In its upward and inward trajectory, straight toward the heart, it [the bullet] had to pass through Roosevelt’s dense overcoat into his suit jacket pocket, then through a hundred glazed pages of his bifolded speech into his vest pocket, which contained a steel-reinforced spectacle case three layers thick, and through two webs of suspender belt, shirt fabric, and undershirt flannel, before eventually finding skin and bone. Even so, its final force had been enough to crack a rib. (pg. 247-8)

Such are the frailties of human life before “the strong force of fate,” as Homer would have it.

Colonel Roosevelt does a good job of portraying this, particularly in TR’s even more harrowing journey at the “River of Doubt.”

Colonel Roosevelt does justice to TR’s ordeal in the Amazon. At no other time in his life, even during the Battle of San Juan Hill, did Theodore Roosevelt come closer to death. Pages and pages are devoted to every aspect of the journey. There were floods which forced them to abandon their canoes and provisions, long days without much food, a murder in their party, infernal insects, and so on.

Theodore Roosevelt found himself wounded in a leg after scraping it on a rock. The wound became infected. He needed to have the abscess lanced and drained without any anesthesia, but he didn’t complain, even as insects were all around. In fact, he had to find civilization again just in order to have it drained. He would soon develop another abscess that also needed to be drained. He needed to board the ship which would finally take him out of the country on a stretcher thanks to all of this.

It was an odyssey all in its own, which shows the Colonel at his hardiest. The book is worth it for these chapters alone.

TR was never quite the same after his Brazilian expedition. As you would expect, the later chapters of the book deal with World War I, which broke out only months after his return from Brazil. It would be three years before the United States finally entered the conflict. During those three years, we see how Theodore Roosevelt understood what many Americans tried to avoid – war would come for the country eventually. Its world power status meant that the oceans could no longer protect the United States from the shockwaves generated by imperial clashes.

As such, he became the champion of the preparedness movement. He also reconciled with William Howard Taft and the leaders in the Republican Party to pressure Woodrow Wilson, who he put through the meat grinder whenever he had the opportunity. It is a fulfilling full-circle story, which we see told well in this biography. By the end, when the Colonel died, we see William Howard Taft among the most distraught.

The book (and the trilogy) ends on this note. It then examines the legacy and historiography of America’s 26th president. The reader is left with the impression of a man so energetic that he demands admiration just because he could do in one hour what lesser mortals might take days or weeks to do. However you view him, you, as the reader, must reckon with that.

Colonel Roosevelt is sure to make you wonder what, exactly, you’re doing with your days, especially as you get older. Click here to read it.