Power is as much about timing as it is personality and messaging. The life of Theodore Roosevelt is a great example. In 1908, he could have walked into a third term. Yet, he decided to stick by his 1904 promise to respect George Washington’s tradition and not seek one. He instead hand-picked his successor, William Howard Taft. Yet, Taft, overshadowed by his predecessor, proved unpopular with the American people. This prompted the man himself to declare “his hat was in the ring.” This phrase embedded itself into the American lexicon, but we should still ask – was Theodore Roosevelt’s 1912 Bull Moose campaign a mistake?

After leaving the White House, Theodore Roosevelt went on a safari in Africa and spent the early part of 1910 in Europe. Everywhere he went, he was greeted as a hero. Everyone expected his “retirement” to only be temporary, so he was feted by heads of state and anyone who could meet him. Back home, though, William Howard Taft was in trouble. The proof came in the 1910 midterms, where the Democrats did better than they had in years. Republicans lost control of the House of Representatives for the first time since 1894 and their Senate majority took a big hit.

Roosevelt’s approach to the campaign was to push the Republican Party in a more “progressive” direction. Recall that the word back then had a different meaning than it does now. This was when he put out his famous “New Nationalism” speech, which I covered in Lives of the Luminaries.

The rift between him and his party grew. As he saw Taft’s continued weakness and perceived him to lack commitment to the issues that mattered to him, Theodore Roosevelt felt the gravitational force of the campaign trail. He did not spend 1911 actively looking to campaign, but events created their own momentum.

The Birth of the “Bull Moose” Party

Roosevelt’s 1912 campaign would not be an easy one. First he intended to beat William Howard Taft for the Republican nomination. Afterward, he would need to beat Woodrow Wilson, a candidate whose platform resembled some of his own. He easily beat Taft in the newfangled primaries, including embarrassing him in his home state of Ohio, but nobody won enough votes to get a majority of delegates. The 2016 fantasies of a convention fight were real in 1912.

Despite winning the most votes in the campaign, Taft’s control of the party machinery prevailed, securing him the nomination. The delegates simply were not eager to adopt some of the far-out items in Roosevelt’s platform. Theodore Roosevelt threw a fit, to say the least. He went off on his longtime mentor and ally, Elihu Root, the chairman of the 1912 convention. He accused everyone of corruption and stormed off, burning many bridges along the way. He vowed that:

He resolved that he would make his own party for the campaign to make good on these words.

The party’s official name was the “Progressive Party,” but in a quip to the press about his continuing to run, Theodore Roosevelt declared that he felt “as strong as a bull moose.” Thus, the party became known as the Bull Moose Party. The problem was that this Bull Moose Party made a similar offer to Woodrow Wilson’s. Ordinarily, TR’s star power would have won out (as readers of Stumped would know), but William Howard Taft was also in the race.

As a result, the 1912 campaign ended in a split vote. Wilson cruised to victory in an Electoral College landslide with 435 votes, winning 40 states. Theodore Roosevelt carried six states and got 88 Electoral votes. William Howard Taft came in an embarrassing third, carrying only two states and eight Electoral votes.

Yet, Wilson did not win a majority of the popular vote. He only eked out a little less than 42%. Combined, TR’s and Taft’s 27 and 23% exceeded his. Even the Socialist candidate, Eugene v. Debs, got 6% of the popular vote in 1912. 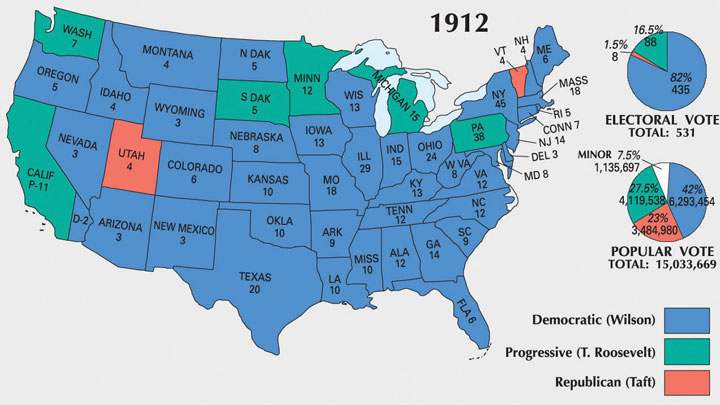 Naturally, Republicans were furious with Theodore Roosevelt. Though William Howard Taft was unpopular anyway, and we can never be sure how a two-party vote would have gone, Roosevelt was naturally the scapegoat.

Theodore Roosevelt was on the outs for a while after 1912. In the first place, his revolt enabled the rise of Woodrow Wilson, soon to go down as the “Worst. President. Ever,” so the catchphrase goes.

For his own power and prestige, too, the 1912 campaign hamstrung him. One of the reasons why he went to Brazil and almost killed himself on the River of Doubt was as a way to unwind from that defeat. It was something of a self-imposed exile.

In 1916, he returned to the Republican fold. He had been on a mission to instill the need for preaparedness into the American people. He knew the country would be dragged into war with Germany, because he was almost dragged into one. He understood that he could do more for this mission as a Republican than as the leader of a splinter party. Yet, the resentment from 1912 hadn’t faded. He passively sought the 1916 nomination, but did not get enough support at the convention. The thoroughly boring Charles Evans Hughes got it instead.

They key thing to consider about the 1912 Bull Moose campaign is this – was it wise for Roosevelt to challenge the incumbent? William Howard Taft was unpopular, but it is natural for a group to form ranks against a perceived outsider. TR positioned himself as one by ruthlessly attacking Taft’s policies and declaring the party corrupt. His platform and attitude didn’t win him allies. For example…

Our fight is a fundamental fight against both of the old corrupt party machines, for both are under the dominion of the plunder league of the professional politicians who are controlled and sustained by the great beneficiaries of privilege and reaction.

These words came at the 1912 Progressive Convention. They referred to Republican politicians. Can you blame them for reacting negatively?

If Taft was as disliked as it seemed, and he was likely to lose, it would have been better for TR to just let it happen and bide his time, once he realized he would face stiff resistance in the primary challenge. He could have stormed back against Wilson, who barely won in 1916. The wounds eventually healed, but too late for him to reap the rewards. Theodore Roosevelt died in early 1919.

As Sun-Tzu would say, power is often a game of patience. 1912 was not the right time for TR to return. Of the four cardinal virtues, temperance was the one he was weakest in. We saw that on display in the last decade of his life. In that regard, we can say that the Bull Moose campaign was a mistake. We can admire his courage, but he truly gained nothing from it.

Read more about Roosevelt’s “New Nationalism,” which led directly to the Bull Moose Party, in Lives of the Luminaries.