War, freedom, and citizenship have always been intertwined. In the Roman Republic, the concept of citizenship itself was tied to military service, as were the political offices. The Romans elected their leaders on the Campus Martius, where the army also assembled for war. In a free society, people have always been expected to sacrifice for the common defense. We saw this first-hand in World War I, as Canada attempted to find its footing as a free state and what that meant for everyone in it. Francis Pegahmagabow found himself in the middle of these forces. This is the often untold story of how this man became the deadliest in the trenches and won respect for his people.

Francis Pghamagabow was born onto a reservation in Ontario for what is now the Wasauksing First Nation. His mother probably died in childbirth and he grew up in an adoptive family. In his native Ojibwe language he was called Binaaswi (“the wind that blows off”). As he was a Native American belonging to one of the First Nations in Canada, he was not considered a citizen, and so was exempt from the military draft when World War I broke out. Ordinances had even been enacted to discourage Aboriginal soldiers from enlisting. Nevertheless, as soon as the war began, he enlisted. He was assigned to the Algonquin Regiment of the Canadian Armed Forces a mere nine days after Britain’s entry into World War I.

Francis Pegahmagabow arrived at the front in early 1915, and stood in the trenches during the first German attack with Chlorine gas at the Second Battle of Ypres. During this battle, as throughout the war, he served as a scout/sniper and messenger – one of the most dangerous jobs of World War I. He forged a reputation for himself as a soldier who was heedless of danger. Command could depend on him to do any job in no-man’s land. He even displayed a thrill-seeking streak. For example, he would often infiltrate German trenches and take souvenirs off the soldiers as they were sleeping, to keep as trophies.

For continuous service as a messenger from February 14th 1915 to February 1916. He carried messages with great bravery and success during the whole of the actions at Ypres, Festubert and Givenchy. In all his work he has consistently shown a disregard for danger and his faithfulness to duty is highly commendable.


“The Year of Battles” saw Francis Pegahmagabow earn another huge honor for an Aboriginal soldier. He fought through the carnage at the Somme with such dash and disregard for his own safety that he was awarded with a Military Medal and nominated for the Distinguished Conduct Medal – the second highest award for Britain and its Dominions.

But he did not come out of the Somme unscathed. Like so many millions in that carnage, he was wounded in the leg and taken out of action. He did not return to the front until the spring of 1917. He could have stayed on the shelf longer, but refused, and insisted that he return to duty as soon as possible.

Greater commendations on the battlefield awaited him still.

Francis Pegahmagabow was again on the front line in the mud and blood of Passhendaele. He served in one of the leading units that launched an attack on a heavily-defended German position at the village itself. However, these were still the days before tactical radio communication. One of the under-reported reasons for the carnage in World War I is that orders often got bungled or never got through to begin with.

Such turned out to be the case in this move at Passhendaele. During his unit’s attack on the Germans, several reinforcement units got lost. Francis Pghamagabow guided them back into position. The mud, shells, machine gun fire – he was heedless of all of it. For his actions that day, he got a bar on his Military Medal. This is his official citation:

At Passchendaele Nov. 6th/7th, 1917, this NCO [non-commissioned officer] did excellent work. Before and after the attack he kept in touch with the flanks, advising the units he had seen, this information proving the success of the attack and saving valuable time in consolidating. He also guided the relief to its proper place after it had become mixed up.

This was an extraordinary achievement for an Aboriginal soldier, but World War I had a year left to run. Would he outdo himself again? Would his luck hold?

The German Spring Offensive (the Kaiserschlacht) had been stopped. Now the Allied counterattack (the Hundred Days Offensive). As always, Francis Pegahmagabow was in the thickest of the fighting. During the Battle of the Scarpe in August, his unit received a German counterattack after achieving its initial objective. They fought hard, but the Germans kept coming, and they were running out of ammunition. Here, Pegahmagabow again distinguished himself with a legendary feat. He took the initiative to bring back more ammunition for his comrades, no matter how much fire he would take in the process.

For this, Pegahmagabow got a second bar on his military medal. His official citation reads:

During the operations of August 30, 1918, at Orix Trench, near Upton Wood, when his company were almost out of ammunition and in danger of being surrounded, this NCO went over the top under heavy MG [machine gun] and rifle fire and brought back sufficient ammunition to enable the post to carry on and assist in repulsing heavy enemy counter-attacks.

For his entire service in World War I, his record stands at an astonishing 378 confirmed sniper kills and over 300 prisoners captured.

Still, even for him, the conflict took its toll on his psyche. Toward the end of 1918, he was taken off the line, and described as having symptoms consistent with what we would call Post-Traumatic Stress Disorder today.

How did Francis Pegahmagabow Do What He Did?

It is a wonder that Francis Pegahmagabow doesn’t have a movie like Alvin York does. His feats seem superhuman, but they were very real, and contain lessons for us in this dark time in which courage is needed more than at any point in decades.

His reputation can be summed up in the words of one of his comrades:

Pegahmagabow went looking for it [danger]. He preferred to work alone, in the dark, even infiltrating an enemy trench to stand among its occupants for the fun of it.

Like many soldiers, Francis Pegahmagabow was superstitious. Before the war, he worked as a sailor. There, he received a pouch that, he was told, would save him from danger. A superstition to be sure, but he believed it. It may have created a self-fulfilling prophecy. He also chewed twigs before action, believing that this would protect him.

As his reputation grew, his comrades thought that his Aboriginal customs would protect them, too. He incorporated Ojibwa rituals into his routine, and brought his comrades into those rituals. In this way, he increased the respect that Canadian citizens had for First Nation Aboriginals, which would prove important later.

Surely these rituals had little to do with his success on their own, but as we’ve often seen with extraordinary people, imagination creates reality. Given confidence by these links with his heritage, Francis Pegahmagabow served in World War I with no distractions. He focused on only one thing – doing damage to the enemy. He had a pure mind, the real Ultra Instinct.

Francis Pegahmagabow After World War I 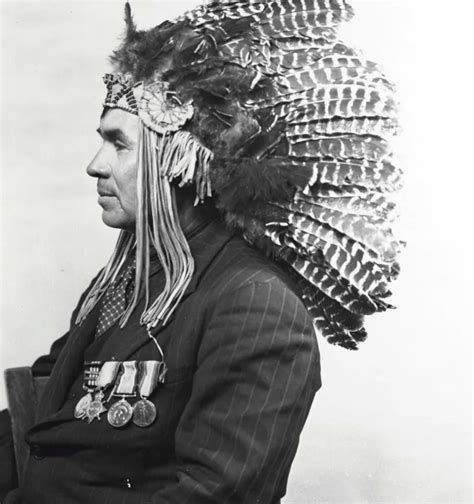 After returning home, Francis Pegahmagabow stayed with the militia and campaigned tirelessly for Aboriginal rights. Note that he was not even a Canadian citizen, still! He was elected Chief of the Parry Island Band three times, and served as chief of the Chief of the Wasauksing First Nation twice. Finally, the Citizenship Act of 1956 granted them that status. By 1960, they were enfranchised to vote in federal elections.

Francis Pegahmagabow did not live long enough to see this. He died in 1952, but his service, and the service of his Aboriginal comrades in the World Wars, forced Canada to change its view of citizenship. It has always been the case in free societies. This is the truest mark of his glory.

For more tales of pure-minded, instinctive heroism, read Lives of the Luminaries.