It’s official. After 17 months of self-congratulatory books, an Emmy, and all those “Cuomosexual” shirts, Andrew Cuomo is out. You will witness few such rapid, thorough reversals of fortune in your lifetime. What can you learn from the fall of Andrew Cuomo? Cicero offers some clues. Louis XIV offers a more modern perspective. Let’s begin with Herodotus, though.

The Ring and the Fish

Fortune is the true protagonist of Herodotus’ Histories. We see this throughout all of the books, but the story I most love comes in book 3, with the friendship between the Egyptian Pharaoh Amasis and Polycrates of Samos. You have heard this story before when I discussed Joe Biden’s own precarious position, but I must repeat it again:

Now Amasis, as may be supposed, did not fail to perceive that Polycrates was very fortunate, and it concerned him that much more good fortune yet continued to come to Polycrates. He wrote upon a paper these words and sent them to Samos: “Amasis to Polycrates thus – it is a pleasant thing indeed to hear that one who is a friend and guest is faring well; yet to me your great fortune is not pleasing, since I know that the Divinity is jealous; and I think that I desire, both for myself and for those about whom I care, that in some of our affairs we should be prosperous and in others should fail, and thus go through life alternately faring well and ill, rather than that we should be prosperous in all things: for never yet did I hear tell of any one who was prosperous in all things and did not come to an utterly evil end at the last. Now therefore follow my counsel and act as I shall say with respect to your prosperous fortunes. Take thought and consider, and that which you find most valued, and for the loss of which you will be most vexed in your soul, that take and cast away in such a manner that it shall never again come to the sight of men; and if in future from that time forward good fortune does not befall you in alternation with calamities, apply remedies in the manner by me suggested. (III.40)

Polycrates promptly threw his most valuable signet ring into the sea. A fisherman found the fish that had swallowed it and returned it to Polycrates. When Amasis heard the news, he immediately broke off all contact with his former friend:

When Amasis had read the paper which had come from Polycrates, perceived that it was impossible for man to rescue man form the event which was to come to pass, and that Polycrates was destined not to end well, being prosperous in all things, since he found again even what he cast away. Therefore he sent an envoy to him in Samos and said that he broke off the guest-friendship and this he did lest when a fearful and great mishap befell Polycrates, he might himself be grieved in his soul for a man who was his guest. (III.43)

The lesson here is that fortune does not permit you to always be on top, so you should not act like it does, lest you tempt fate, and suffer a greater downfall.

Andrew Cuomo clearly forgot this through his entire tenure. He was always of a bad character and so stood on shaky foundations. His decisions, his boastful nature, and his lack of restraint all set the stage for him to get into big trouble, powerful as he was. This is the most basic lesson every leader should keep in mind. Act with virtue and restraint when in power, or you risk suffering far more than you need to. This is why Ron DeSantis is winning while corporate media darlings are losing. Boastfulness is to be avoided. It sets you up for jealousy and intrigues. Do not make enemies unnecessarily, as Andrew Cuomo did, drunk with power as he was. Glory (kleos) is based on what others hear about you, not the things you boast about yourself. If you believe your power is unlimited, you’re going to end up like Charles I.

Cicero also could have predicted the fall of Andrew Cuomo. The central theme for his On Duties is that moral rightness and expediency are not separate things. We often hear of the supposed dichotomy between practicality and being completely ethical. I must confess that I often wrote about this, such as in my 48 Laws of Power series. Yet, what that book doesn’t teach is that the context in which power must be used is rightful. Those tactics won’t save you from a bad ending. This is what Cicero tells us in On Duties:

When one is presented with something expedient, one is unavoidably tempted by it. But if you pay attention to your heart, you may see that there is some moral disgrace attached to that very thing that appears expedient. Expediency is not exactly abandoned; rather, one perceives that expediency is not really possible when it is tainted by moral degradation. If nothing is so contrary to Nature as moral corruption (Nature seeks right, consistency and constancy and rejects the opposites of these qualities), and nothing is so in accordance with Nature as advantageousness, then it clearly follows that advantageousness and moral corruption cannot exist simultaneously in the same thing.

Here we see a common mistake of the person with a flawed character: when he sees something that appears to be advantageous, he immediately jumps at it and disconnects it from what is morally right. This is how evil-intentioned daggers, poisons and maliciously false testimonies are born. This same impulse also gives rise to larceny, fraud, defalcation while acting as a fiduciary and the shameless exploitation of allies and fellow citizens. It produces the desire for excessive wealth, for usurping power, and finally for playing lord and master over a free people. Nothing more foul or wicked can be imagined than these sorts of bad acts. Acting under the influence of flawed judgment and wishful thinking, the people who do these things see only the imagined benefits that they might get; they do not see the inevitable punishment that results. And when I say punishment, I do not mean punishment under the law, which they often evade, but instead the very bitter punishment that is a consequence of moral corruption. (pg. 174-5)

Do these passages not describe Andrew Cuomo perfectly? This is exactly what happened to him, especially over the past 18 months. Andrew Cuomo saw something that appeared advantageous when covid came to New York. He could exercise his powers to “flatten the curve” and get good press. He legitimately thought that hospitals would be overrun with younger patients, lacking the wisdom to question those epidemiological models. Again, the contrast with DeSantis is stark. DeSantis questioned the models. Andrew Cuomo didn’t. As a result, he ordered covid-positive patients back into nursing homes to preserve hospital bed space for younger people that never came. As Andrew Cuomo rode high on positive press which won him an Emmy, the most vulnerable people got massacred thanks to his order.

The disaster came to light shortly afterward. Andrew Cuomo rode off inertia for a while, and the corporate media did its job with its propaganda, but everyone saw the huge crack in his armor. It was an opportunity his enemies and ambitious underlings were eager to exploit. Louis XIV had a few thoughts on that.

Louis XIV warned his son that he should maintain distance with his servants, not entirely trust any of them, fire them “on the least fault,” and ensure they were well-behaved. Above all, his confidence should be divided among many servants. No one should be permitted a base of power which would threaten the King.

This was another of Cuomo’s mistakes, which ultimately did him in. The fatal one came when he championed the ambitious Leticia James for New York Attorney General. The attorney general position has a history of coups and intrigues against governors. Andrew Cuomo himself did this against Eliot Spitzer. Now fortune’s wheel, as Herodotus called it, turned yet again.

Leticia James was very much Cuomo’s preferred attorney general. Yet, this was a dangerous choice. If a governor is concerned about his well-being, he should want the attorney general to be a weak, unambitious figure, capable of doing the job but nothing else. This is not Leticia James. All she cares about is her own advancement. Andrew Cuomo became the primary obstacle to that advancement. When she saw the opportunity, she pounced without a second thought.

She investigated the nursing home scandal, of course, but the sexual harassment accusations pushed him off the cliff. Andrew Cuomo spent years championing the “Me Too” movement, which used mob behavior to bring men down based on their supposedly inappropriate sexual advances. Some of these men were doubtlessly guilty. Many, however, were not, but got swept up anyway. This is why mob behavior is always harmful. Andrew Cuomo gleefully joined the lynch mob against Brett Kavanaugh. Now, he got bit by the bug.

That Andrew Cuomo fell as a result of the “Me Too” movement and not his mass murder in nursing homes is telling of the Democratic Party’s priorities and who it represents. As I noted here in November, the Democratic Party has a platform that appeals to almost nobody outside of hysterical affluent white women. If you run afoul of this crowd, though, you are in big danger, especially as a Democrat. Cuomo’s behavior may or may not have been what they say it is. Nevertheless, as we’ve seen over and over again, the accusation is enough to cause a scandal. He should have known this and been far more restrained, as Mike Pence famously was. Already on shaky foundations and with many enemies, it wasn’t hard for people to abandon the governor in droves, most crucially the corporate media. He was now an easy scapegoat for covid failures and an unnecessary object in advertising the Democratic Party’s “success” against it.

It also didn’t help that the woke ideology Andrew Cuomo promoted would love for him, a white man, to be ultimately replaced by a “woman of color.” Had Andrew Cuomo gotten a white man into the attorney general’s office, maybe he could have saved himself. Not knowing the tenor of the times, and his faction in particular, cost him. 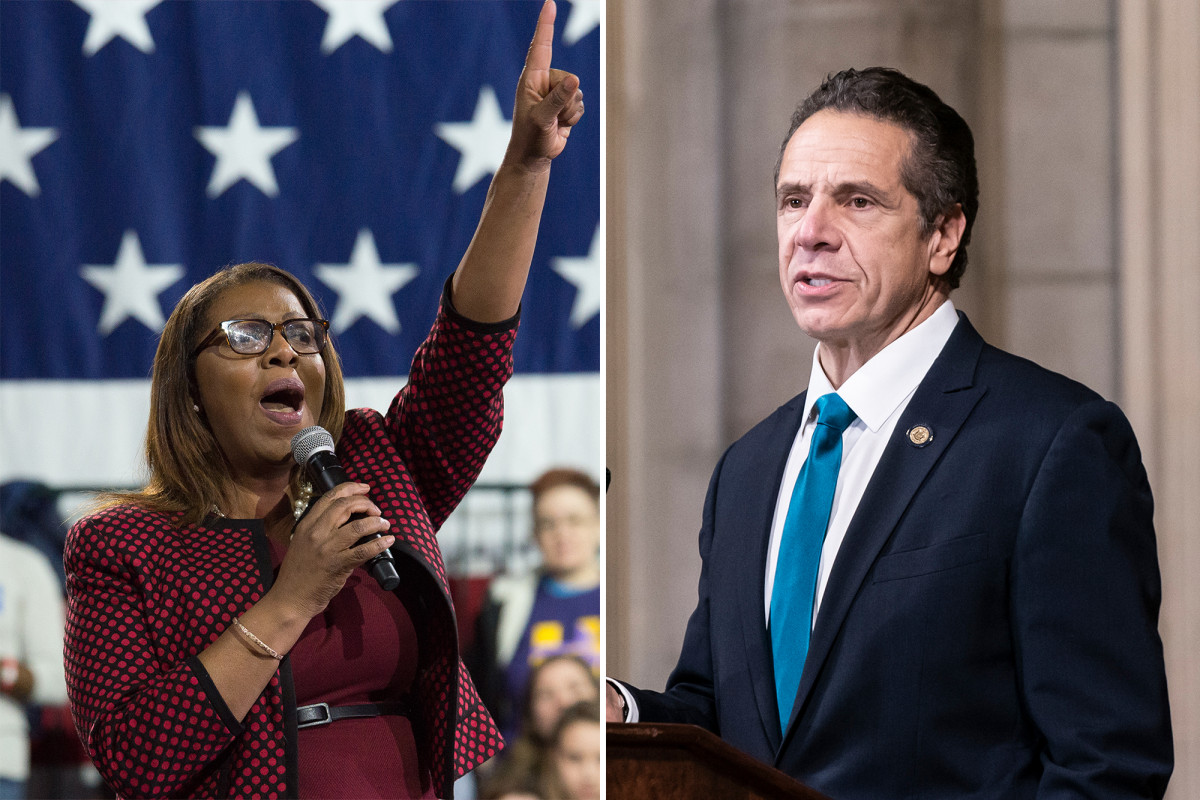 We are reminded of another of Louis XIV’s maxims:

Louis XIV is speaking of the same thing Cicero did. This, above all, describes the Andrew Cuomo story.

The lessons of history and philosophy, which you will find littered in piles throughout Lives of the Luminaries, were lost on the governor. Don’t be like him. Reading the book will help you to avoid his fate.