For ages, man has wondered how he might live the best and happiest life. The world’s collapse into a feverish, Chinese-sponsored mass hysteria over their coronavirus gave this question prominent exposure. It revealed that modernity’s answer to the age-old question is sorely lacking. Happiness is clearly not found, on a fundamental level, in material comfort and “safety.” One need look no further than Australia and New Zealand as proof of this. They destroyed their historical and cultural heritage and gave up their freedom and identities in pursuit of the illusion that they can be “safe” and “comfortable.” Are they happy? Are they living well? You answer.

It is with this in mind that Quintus Curtius released a new translation of Cicero’s Tusculan Disputations. This might be one of the lesser-known works of Cicero, at least compared to On Duties and On Moral Ends. However, Tusculan Disputations is arguably more important than either of them, because it is about managing your mental state through the use of philosophy.

This was an important matter for Cicero, who had been forced from power by the rise of Caesar and his successors. He lived to see the destruction of the republic he loved. In addition to these professional and civic losses, he suffered the death of his daughter, Tullia, which plunged him into a deep depression. To help with this situation, he wrote the works of philosophy that we know today. Tusculan Disputations, then, is about managing mental anguish, and comes from personal experience. 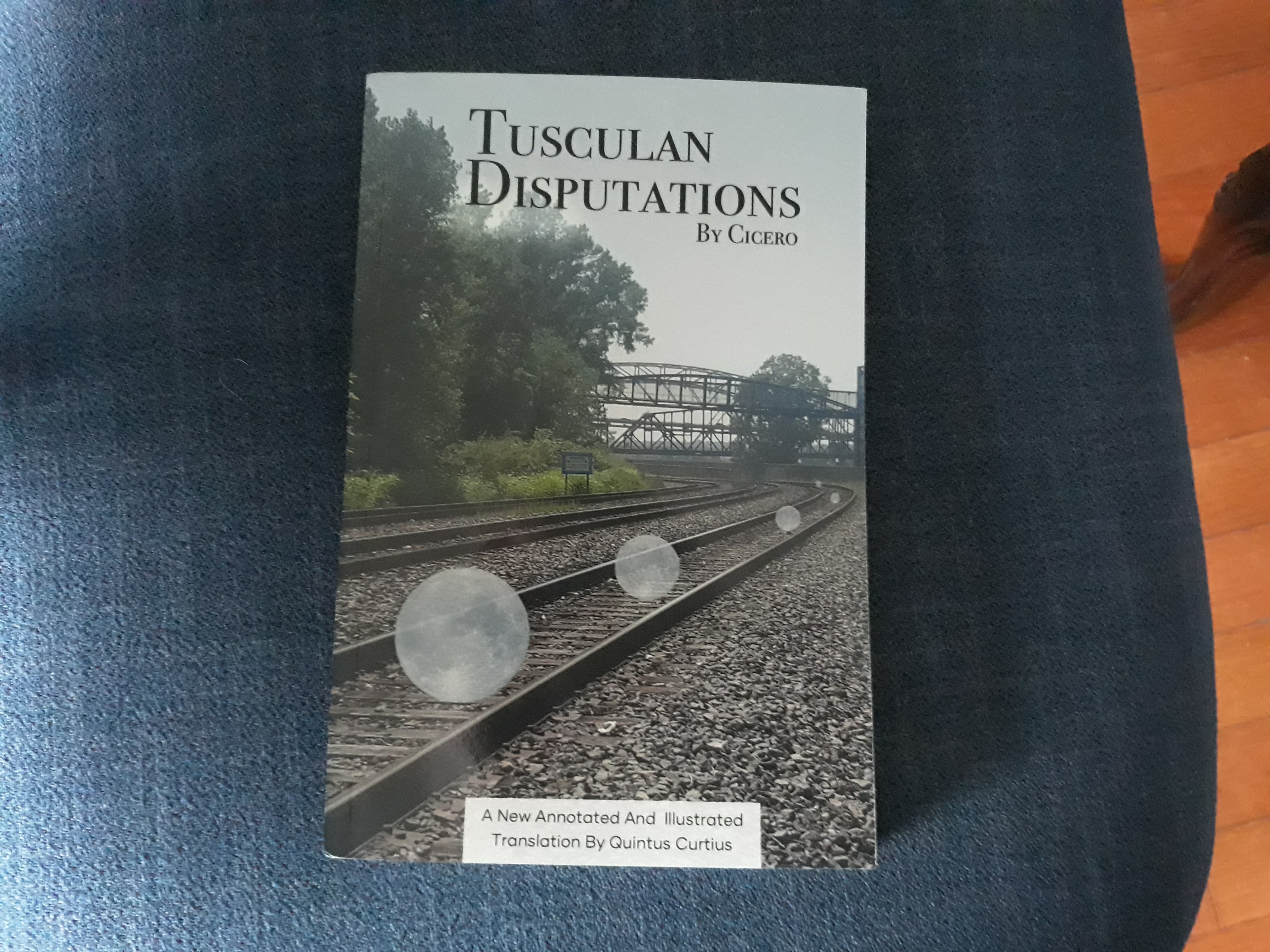 I’ll go over some choice passages and a couple of the most important lessons from the book.

At its base, coronavirus hysteria came because Western liberal modernity fears death so much. Severed as it is from its religious and philosophical heritage, there is no good answer about the end of life. Everything has been subsumed into license and consumerism.

We are also separated from death to a far greater degree than previous generations. We don’t kill our own animals for food anymore. Relatives usually don’t die at home anymore. The most we see of death is usually a coffin going into the ground, so we just aren’t used to it.

The natural result was a huge mass hysteria when we thought there was a slight elevation of the threat of death. The toilet paper runs of the early covid era, and more destructively, the lockdowns and masks, are examples of desperation for control over the perceived threat of death. Yet, death can come at any time, and we cannot stop it. Cicero knew this and his conclusion was that death is not something we should fear.

Much of the discourse concerns the existence of and immortality of the soul. This might sound archaic to modern ears, but there is a “modern” perspective, too. Death is simply an eternal sleep – a relative (as it is in the Iliad), where all sense-perception stops. This also means that we do not experience any more of life’s sorrows and burdens. Therefore, death cannot be terrible, or at least it isn’t something to fear.

If it so happens for us that God provides notice that we should leave this life, let us comply happily and while giving thanks. Let us reflect that we have been released from prison, and unshackled from our chains, so that we may either return to the eternal abode which clearly belongs to us, or be liberated from all sensation and worldly difficulties. But if, however, we receive no such summons, let us still believe that that day is a favorable one for us – even though to others it may appear dreadful – and to understand nothing is evil that originates from either the immortal gods or from nature, the author of all creation. (pg. 93)

Cicero’s position might appear depressing to modern ears, but is it not true? If we truly believe there is nothing after life, there should be nothing to fear, because who has ever feared a deep sleep? The prospect of not waking up might be sad, but it is also not an evil. The only evil would be leaving life without having done all we wanted in it, but that is why we should live the kind of life of virtue which begets glory to begin with! Cicero is adamant that the two closely mirror each other. While glory should not be pursued for its own sake, he says, it accompanies the virtuous life.

The various disturbances of the mind, Cicero says, whether they be fear, lust, joy, sorrow, and on, are based not in reality, but on the importance and value we assign to the things we attach these emotions to. This is a shockingly modern view of the mind and psychology, and shows how astute Cicero really was.

Take this passage about anguish, for example:

Just as doctors treating an entire body will work to heal the most insignificant part, if that happens to be afflicted, so philosophy operates in the same way. Once it removed grief in general, it took away the erroneous belief arising from some cause, whether it be the ache of poverty, the pain of humiliation, the black shade of obscurity in which exiles live, or any of the other circumstances I have mentioned. Yet, for each of these situations, there is a distinct and suitable consolation, which you will indeed hear when you wish. Yet, in every one of these cases, one must look back to the same source: that all anguish is absent from the wise man. This is because it is empty, because submerging oneself in it does no good, and because it does not originate from nature’s design but from our own mistaken judgments, our own beliefs, which act as some kind of enticement to sorrow when we have decided that we ought to be controlled by it. Once we have rid ourselves of that completely self-adopted belief, the melancholy pain we have discussed will then be removed. (pg. 181)

This is a passage of profound endorsement of philosophy as a mental therapy and cure. Just as I said in Lives of the Luminaries chapter 51 that virtue is a vaccine against the baseness and venality that’s pushed on the public these days, Cicero says it can also heal our own wounds. Recall he was writing from recent experience.

Virtue is not only a shield against fortune’s whims, but it is also a way for us to weather the inevitable setbacks that she gives us. Look at the careers of the Duke of Marlborough and many of the others mentioned in Lives of the Luminaries and you’ll see this first-hand. On that note…

On Virtue as the Key to Happiness

Unsurprisingly, Cicero is adamant in Tusculan Disputations that virtue alone is sufficient for happiness. He even goes so far as to say that the man of virtue (the “wise man”) will be perfectly content even as he is dropped into Phalaris’ Bull – the bronze edifice wherein prisoners were roasted alive, bellowing like bulls in the process.

That might sound like a crazy thing to say, but think of it this way – is it better to go in a panicked frenzy or with calm dignity, knowing that death will be a liberation, and you will be refusing your tormentors by showing no fear, just as Charles I did? That English king was a bad leader, but he made the final days of his life his finest ones, and he is often remembered for that conduct more than for his foolish decisions prior to that point.

On virtue vs. other matters, Cicero says:

When one of Dionysius’ toadies, a man named Damocles, expounded on the tyrant’s military forces, resources, the majesty of his rule, the extent of his assets, and the magnificence of his official residences, and denied that anyone had ever been happier than he was, Dionysius replied, “Since this life seems so appealing to you, Damocles, do you want to taste it yourself and experience my fortune?” When Damocles answered that he would indeed like to experience this, Dionysius told him to sit on a golden couch with beautiful woven coverings made with the most finely detailed artistry. He garnished this with some furniture pieces holding engraved gold and silver articles of table service. Then he ordered boys slected for their attractive physical appearances to take up positions at his table and wait on him. They were to watch for his nod and attend diligently to his needs.

Scented oils and wreaths were there, too, and incence was burned. The tables were piled high with the most desirable dishes, and Damocles saw himself as the most fortunate of men. In the middle of this arrangement Dionysius ordered a shining sword, suspended by a horsehair, to be lowered from the ceiling, so that it dangled over the neck of the happy man. He looked at neither the attractive servants nor the finely-crafted tableware. He did not extend his hand to take what was on the dinner table. Then the wreaths fell from their positions. Finally Damocles begged the tyrant to let him leave, because now he did not want to be “happy.” Isn’t it true that Dionysius apparently declared that someone who always has some terror dangling over his head can never be happy?

But at that point it was impossible for Dionysius to redirect himself back to justice, and to give back freedom and the rule of law to his people. For as a reckless youth he had trapped himself by his actions; he had committed so many grievous mistakes that, if he ever began to act so reasonably, he would never be safe. (pg. 249)

And does this not sound like Fauci and all the other “Branch Covidians?” If they have any “expertise” at all, they know that the “non-pharmaceutical interventions” they’ve tortured the public with for 18 months do nothing at all to “slow,” let alone “stop,” the spread of a respiratory virus as contagious as Sars-CoV-2. Yet, they cannot admit this so easily, because it’s their own heads on the line. Their own imprudence and lack of virtue forced them to ride a tiger and take everyone on a downward spiral with them.

This, I suspect, is the reason why Quintus Curtius decided to release Tusculan Disputations at this particular time. We see what happens with the lack of virtue in leaders and the pursuit of things other than virtue as the ultimate ideal.

Tusculan Disputations was my favorite work of Cicero thus far. With all of the crap out there today, you need to be careful about what you put into your head. Not only will you put good things in your head by reading this, but learn how to control the bad things, and get advice on how to cope with inevitable misfortunes, from someone who was there. This is the magic of a book, Carl Sagan said. You can directly communicate with someone who lived in the ancient past and thousands of miles away. And Cicero has much to say about how you should manage your thoughts and your mentality.

Click here to get Quintus Curtius’ translation of Tusculan Disputations.