Lives of the Luminaries was finally released on November 27th, 2020. It is available in paperback and ebook formats.

What emerges in Carpenter’s prose is an abiding enthusiasm for the subject matter, a consistent optimism, and a clear mastery of the material. The reader is drawn in, and engaged. – Quintus Curtius

Are you your own man or are you whatever your preferred news source assigns you as? This is not an abstract question. Aristotle observed that there were two kinds of excellence: of thought and of character. Unfortunately, the most powerful people in our world are thoroughly lacking in both, but that doesn’t mean you need to follow their lead.

The Crux of the Problem

Our ruling class created (and was created by) a world that values knowledge without wisdom, easy living over good living, hedonism over glory. This leads to an attitude of hysteria and unwise decision-making, which will surely leave its victims more vulnerable to reversals of fortune. Think of a luxury ship guided by a self-assured navigator, reveling in his most prized possession – only for him to crash on a crag and discover that he doesn’t know how to swim.

To avoid such a fate, classical writers and philosophers understood that it was important to develop a good character. This could be achieved through cultivating optimal habits and a sound education. One of the best ways to imbue good character would be to look at examples of conduct by figures in history and determine what traits were involved in their successes and downfalls. This was largely the aim of historians like Herodotus and Plutarch. They were not interested merely in disembodied facts, but the larger moral picture of the men they profiled. This kind of wisdom literature was common in past ages, but has been neglected since the mid-20th century, when the study of classics declined. It would be hard to conclude that the corrosion of our national character, particularly in our ruling class, was not related to this decline.

I credit my study of classical philosophy and the character traits of historical figures as a major part of the reason why I’ve stayed, to the extent possible, my own man. In this world of algorithm-driven lies and hysteria, maintaining a cool demeanor and good decision-making skills has never been more important. It was for this reason that I started the Masculine Epic, and why I’ve collected its best historical biographies, improved them, and added some new ones, to Lives of the Luminaries.

Lives of the Luminaries is a collection of 51 essays examining the careers and character traits of notable historical figures ranging from ancient Egypt to our own time. They run the gamut from kings and conquerors to scientists and athletes. Each chapter is a short biography that usually focuses on that individual’s character traits and how they influenced the events described. Through an examination of these careers and characters, the reader may learn valuable lessons about building the appropriate habits, thoughts, and mindset to live a flourishing life, resilient against reversals of fortune. Here is the book’s table of contents:

As you can see, the essays cover people from quite different time periods and career paths. You will see who they were and who they interacted with, the character traits involved in their successes or failures, how fortune varied among them, and what wisdom you can glean from them. Such are the unifying themes of the book.

Throughout, we’ll venture from the Step Pyramid to the stars, and encounter courage, timidity, love, mania, demagoguery, confidence, hubris, charisma, and much more as we see the frailty of our humanity interact with the implacable force of fortune. Through the glory and rubble, we hope that our wisdom will be advanced, and that we can imitate the best while avoiding the worst.

The book is currently available in four places:

The cover was designed by fitraalgha on Fiverr, who was very helpful, and who I would recommend if you need similar artwork done. 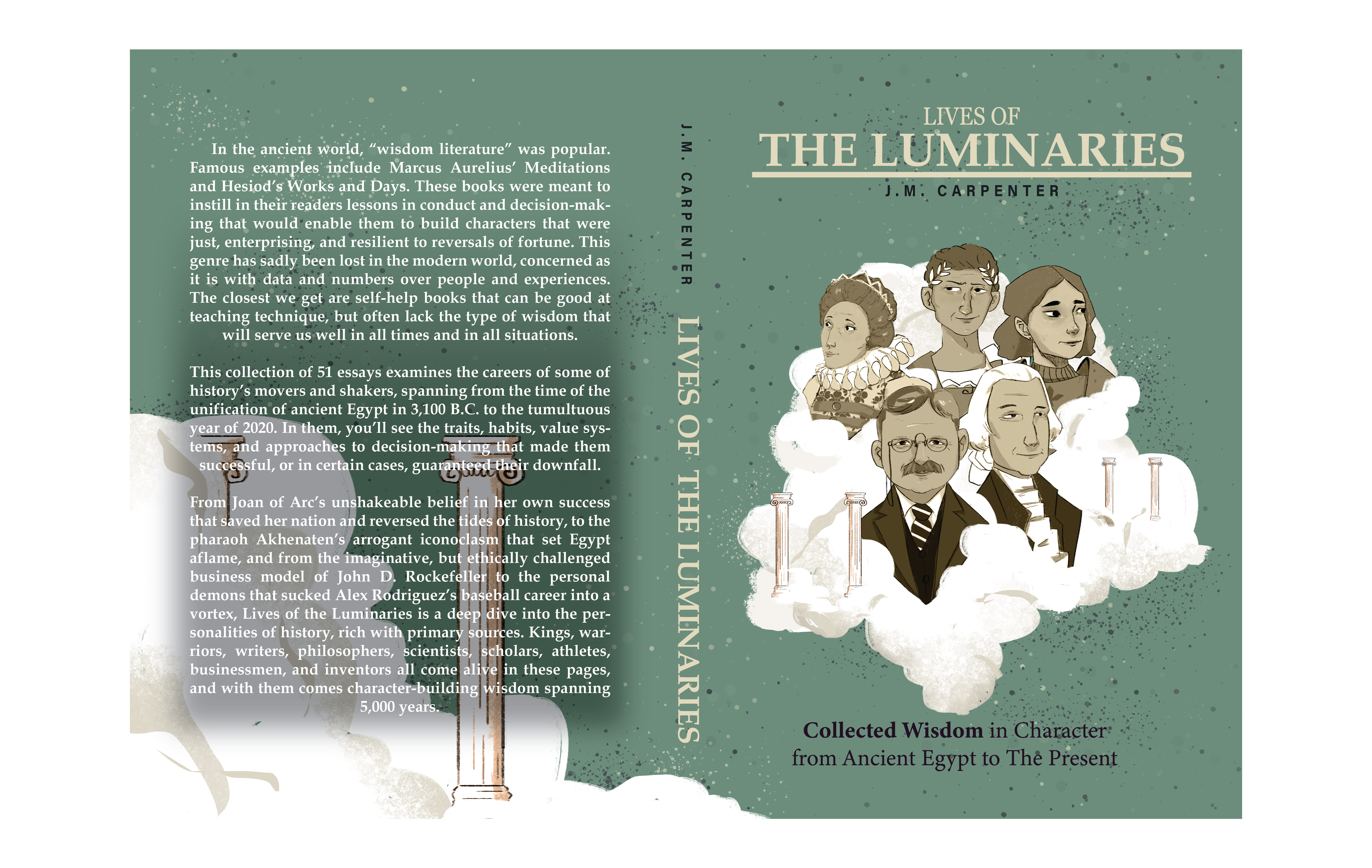 Lives of the Luminaries has been reviewed by Quintus at Fortress of the Mind. Click here to read it.